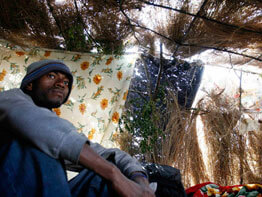 WASHINGTON – Europe and Iraq were ranked among the 10 “worst places for refugees” in the 2008 World Refugee Survey for policies such as “warehousing” refugees for decades or for forcing them back to dangerous situations in their homelands.

The survey, released June 19 in Washington at a press conference and in 20 other cities around the world the same day, also put Bangladesh, China, India, Kenya, Malaysia, Sudan, Russia and Thailand on its list of worst places.

It singled out Europe for policies that “make it as difficult as possible to enter” that continent’s territory. Countries on the periphery of Europe had the harshest policies, it said, and some forcibly return asylum seekers to dangerous conditions. Europe is home to about 528,000 refugees, largely from Eastern Europe, Afghanistan and Iraq.

Iraq, which itself has generated more than 2 million refugees, meanwhile has been a country of refuge for about 45,000 Turks, Palestinians and Iranians. The survey prepared by the U.S. Committee for Refugees and Immigrants said retribution against Palestinians since the fall of Iraqi President Saddam Hussein’s regime in 2003 has caused 85,000 Palestinians to flee, leaving about 15,000 in Iraq.

Among the situations earning countries spots on the list of worst places were:

– China’s forcible return of hundreds of North Korean refugees and policies that treat North Koreans as illegal immigrants rather than refugees.

– “Bangladesh makes life miserable for 178,000 Rohingya refugees” from Myanmar, it said. It cited widespread impunity for the rape of refugee women, the lack of legal status, and the placement of a camp for 10,000 refugees between a highway and a river, where car accidents and flooding regularly occur.

– Kenya’s “warehousing” of 243,000 refugees for at least 15 years, many in camps where rape, domestic violence and other crimes are common.

– Russia’s “Byzantine system of rules and regulations that make it virtually impossible for asylum seekers to obtain legal refugee status.”

The survey’s “report card” grading in four areas earned the United States two A’s, for freedom of movement and the right to earn a livelihood; a D, for its policies of detention and access to courts; and an F for its policies affecting the physical protection of refugees.

It noted that the U.S. Coast Guard returned nearly 1,600 Haitians and more than 3,200 Cubans who were intercepted at sea trying to reach the United States.

In another example, it explained that the 2001 Patriot Act and the 2005 Real ID Act have prevented the admission of many refugees, largely because the laws’ definition of “terrorist activity” as a bar to entry is so broad that it includes people who under duress gave food or water to those the law deemed terrorists.

The D grade for freedom of movement and access to courts in the U.S. resulted from the detention of up to 27,000 refugees or asylum seekers on any given day during the year, including the detention of approximately 7,000 children. Recent news reports on problems with health care provided to detainees and lawsuits over overcrowding at detention centers also were cited.

The sections describing what led to the A grades for the United States explained that people who have refugee status and asylum seekers who aren’t detained can travel freely and have the right to work legally, though with some delays and time limits.

The per capita ratio of refugees resettled or being housed temporarily is dramatic for many nations.

In many countries in the Middle East and Africa, the number of refugees in nonpermanent situations was stark. The West Bank and Gaza are home to nearly 1.8 million refugees, creating a ratio of refugees to permanent residents of 1-to-2, the report said. In Jordan, which is sheltering 450,000 Iraqi refugees, this ratio is 1-to-9. And in Syria – where there are 1.85 million refugees, including 1.3 million Iraqis – the ratio is 1-to-11.

The legal distinction between refugees and asylum holders is that refugees obtain permission to resettle in a new country while they are still outside that new country, while asylum seekers arrive at a destination and then seek authorization to stay. Both must demonstrate that conditions in their homelands are too insecure for them to return safely.

Lavinia Limon, president of the U.S. Committee for Refugees and Immigrants, said at the Washington press conference that less than one-half of 1 percent of the world’s refugees is ever resettled in a permanent new home.

She said an estimated 8.5 million refugees are “warehoused” or being restricted for five years or more in camps or other segregated housing with limited rights and restricted access to education and jobs.