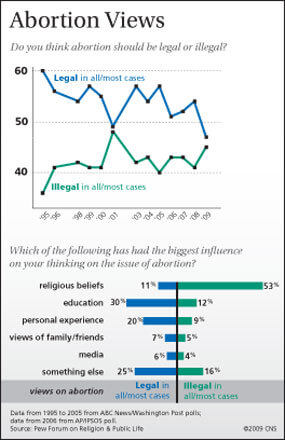 WASHINGTON – Although a new poll showed a significant decline in support for abortion in the United States, an official of the U.S. bishops’ pro-life secretariat said the results would have been even more strongly pro-life if they had been grouped to truly reflect the current state of U.S. abortion law.

Deirdre A. McQuade, assistant director for policy and communications in the bishops’ Secretariat for Pro-Life Activities, said Oct. 6 that the survey results from the Pew Forum on Religion & Public Life released Oct. 1 showed encouraging shifts in American opinion against legal abortion and for parental consent before a minor’s abortion.

The margin of error for the most recent survey was plus or minus 2 percentage points.

But McQuade said the survey results “do not helpfully reflect the current state of abortion law,” which allows abortions for virtually any reason throughout the nine months of pregnancy under Roe v. Wade, the 1973 Supreme Court decision legalizing abortion.

“Declines in support for legal abortion are seen among a wide variety of demographic groups,” the Pew report noted. Among those showing declines of at least 10 percentage points in support for legal abortion were white, non-Hispanic Catholics and white mainline Protestants who attend church at least weekly; Jews; moderate to liberal Republicans; those ages 30-49; white evangelical Protestants who attend church services less than weekly; and Republican-leaning independents.

“Similarly, several groups that were previously divided in their views on abortion now come down clearly on the pro-life side,” the report added. “Among Hispanics, seniors, those with a high school education or less, Southerners and less-observant white evangelicals, abortion opponents now outnumber supporters of abortion rights.”

The survey also asked about the “biggest influence on your thinking on the issue of abortion,” offering the choices of religious beliefs, education, a personal experience, the views of family or friends and the media.

More than half (53 percent) of those who thought abortion should be illegal in most or all cases cited religious beliefs as the biggest influence, while 12 percent said education and 16 percent said something else.

Although overall only 35 percent of Catholics cited their religious beliefs as the biggest influence on their abortion views, 60 percent of Catholics who attend church at least weekly did so. For Catholics who attend church services less frequently, the percentage who said their religious beliefs influenced their abortion views dropped to 19 percent.

McQuade said it was an “encouraging sign that those who are going to church to hear God’s word and what the church teaches and to have access to the sacraments … oppose the legality of abortion and think it should be more difficult to get.”

Asked whether they support “requiring that women under the age of 18 get the consent of at least one parent before they are allowed to have an abortion,” 76 percent of Americans said they favor or strongly favor such a requirement. Even 71 percent of those who think abortion should be legal in all or most cases said they supported the requirement.

Currently 25 states require parental consent before a minor’s abortion, and another 11 require notification of at least one parent.