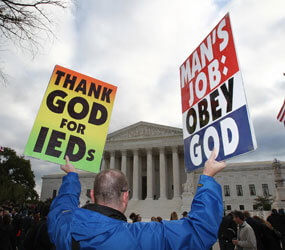 WASHINGTON – The thorny question of whether the First Amendment protects the right to protest in a way that disrupts a family funeral is among the cases on this year’s Supreme Court docket.

Other cases accepted for the term that are being followed by Catholic entities include a constitutional challenge to Arizona’s tuition tax credit system because it includes religious schools, another Arizona case over a state immigration law and at least one death penalty challenge.

In the funeral protest case, heard by the court Oct. 6, Albert Snyder of York, Pa., sued the Rev. Fred W. Phelps and members of his congregation at Westboro Baptist Church in Topeka, Kan., seeking financial compensation for emotional distress, defamation and other such injuries.

Members of the church protested outside the 2006 funeral at St. John Church in Westminster, of Snyder’s son, Matthew, who was killed while serving as a Marine in Iraq.

Rev. Phelps teaches that the deaths of soldiers are God’s vengeance on the United States for society’s – and the military’s – tolerance of homosexuality. The Westboro members have made a practice of protesting at funerals of soldiers, with signs such as “God Hates the USA,” “God Hates Fags” and “Thank God for Dead Soldiers.”

Though the protest was at a distance from the church and the funeral procession was routed so as to avoid traveling near it, Snyder and his family saw coverage of the Westboro protest on the news during the wake. Because the Snyders are Catholic, signs used at this particular protest included “Priests Rape Boys” and “Pope in Hell.”

While searching the Internet for stories about his son, Snyder also later came across a piece posted on the church’s website that said Snyder and his ex-wife taught their son “that God was a liar.”

A Maryland federal district court ruled in favor of Snyder, but the 4th U.S. Circuit Court of Appeals overturned the ruling, saying, essentially, that the statements on the signs fell within the scope of First Amendment protection.

In oral arguments, the Supreme Court justices seemed to be trying to find a way to uphold the First Amendment protection of even “very obnoxious” speech, as Justice Stephen Breyer put it, while somehow shielding grief-stricken families from further pain because of such protests.

Discussion in the court touched on whether protests can defame someone who’s dead; whether the Snyder family became “public figures,” opening them to the attacks by Westboro because they talked about Matthew Snyder’s death to reporters; and whether the doctrine of “fighting words” would apply. The doctrine, dating from the 1940s, says that First Amendment protections are limited when someone uses “fighting words” to incite violence.

In a case being heard by the justices Nov. 3, Arizona School Tuition Organization v. Winn, the court will consider the constitutionality of Arizona’s tuition tax credit system. It allows taxpayers to get a tax credit for donations to private organizations that use the funds for scholarships to specific parochial schools. The 9th U.S. Circuit Court of Appeals found the system violates the Establishment Clause of the Constitution because it lacks religious neutrality.

The U.S. Conference of Catholic Bishops is among dozens of religious and civil rights groups filing friend-of-the-court, or “amicus,” briefs in the case. Writing for the Union of Orthodox Jewish Congregations of America, the Christian Legal Society, the Council for Christian Colleges and Universities, the Center for Arizona Policy and the Association for Biblical Higher Education, the USCCB urged the court to reverse the lower court.

The brief said the case is not simply about the question of “indirect aid” to religious schools, but that “government respect for the voluntary choices of private parties in matters of religion embodies the most fundamental goal of the religion clauses as a whole. It minimizes government influence over religious decisions, and it specifies the way in which government action should be neutral toward religion: It should be “substantively neutral,” in the sense of minimizing government-created incentives either for or against religious practice.”

In one death penalty case on the docket, the role of DNA evidence and a suspect’s right to have it tested, will be considered. In Skinner v. Switzer, Texas inmate Henry W. Skinner seeks testing of DNA evidence he argues will prove him innocent of the murder that landed him on death row. He has spent 10 years trying to persuade a court to order the testing of evidence taken at the crime scene.

Among the cases awaiting a decision as to whether the court will hear them is a challenge to California universities’ policy of not accepting parochial high school religion classes as part of their application requirements.

The Catholic League for Religious and Civil Rights and Ignatius Press are among those urging the court to take the case. The University of California system has a history of rejecting applicants’ religion classes as part of the minimum admission requirements when the courses are taught from a religious viewpoint.