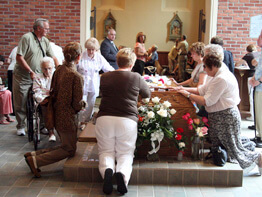 DETROIT – Donald Veryser, a member of Our Lady Star of the Sea Parish in suburban Grosse Pointe Woods, was among the many supporters of Capuchin Father Solanus Casey’s cause for sainthood who came to St. Bonaventure Monastery in Detroit July 28-29 to pray for his beatification.
Supporters of Father Casey’s cause filled the chapel of St. Bonaventure Monastery near downtown Detroit four times that Saturday and Sunday for Mass and novena prayers for his cause, at the 50th anniversary of his death.
Veryser, 53, who was with one of his sons, Daniel, 12, said he was there “for the opportunity to make prayer requests and to say thank you for the sale of my business and industrial buildings in a terribly depressed market.”
He said he had grown up hearing about praying to Father Casey from an aunt who was a Sister of the Immaculate Heart of Mary. “All these years I’ve been praying for the health of our family business, for safety in the workplace and for our employees, and I have so much to be grateful for. And now I’m praying for job security, now that I’m an employee rather than an employer,” Veryser said.
Father Casey (1870-1957), a Capuchin priest who gained a popular following during his life, with astonishing healings attributed to his intercession both before and after his death, could become the first U.S.-born male saint.
For that to happen, the Vatican must first certify one of those healings that took place after his death as miraculous, which would result in his being beatified, or declared blessed. Another miracle, after his beatification, would be needed for him to advance to sainthood.
Each of the monastery’s Saturday vigil and Sunday Masses drew capacity congregations of about 400 people. In addition, the weekday Masses had been attracting 125-150 people each day since the novena for his beatification began July 23, said Capuchin Brother Leo Wollenweber, vice postulator for the canonization cause of Father Casey, who spent part of his ministry as the doorkeeper at St. Bonaventure.
The novena was to conclude July 31, the anniversary of Father Casey’s death in 1957.
“It certainly has been an uplifting experience to see the people here today, how every Mass was just filled,” said Capuchin Brother Richard Merling, director of the Father Solanus Guild.
Father Casey, born Bernard Francis Casey, was a Wisconsin-born Capuchin priest of the Detroit-based province of St. Joseph. He entered the order in 1897 at St. Bonaventure Monastery, and was assigned there from 1924 to 1946, and again in 1956-57. He also worked at Capuchin-run parishes in Indiana, New York and Wisconsin.
He was declared venerable – worthy of private veneration – by Pope John Paul II in 1995.
Besides cheering Detroit’s Capuchin community, the turnout for the weekend Masses was encouraging for Father Casey’s relatives.
Neil McCluskey, 86, of Pompano Beach, Fla., is Father Casey’s only surviving nephew. “My mother, Mary Genevieve Casey, was the baby of the family, the last of 16 Casey siblings,” said McCluskey, a member of St. Columban Parish in Pompano Beach.
A former Jesuit priest, now laicized, McCluskey said he would visit his uncle while in Detroit to lecture at the University of Detroit.
“I only visited him five or six times, but I got to spend some whole days with him,” he said. “He was always kind of special. He had a thick patina of humanity – he’d laugh and he’d joke and he’d tease you.”
Jim Conley, 62, of Miami Lakes, Fla., a grandnephew, said he had a chance to see Father Casey a number of times when his family would drive from Chicago to Huntington, Ind., where he was assigned, or he would come to Chicago to stay with them.
“He was very gentle, very loving, and we just all felt privileged to have a priest in the family,” said Conley, a member of Our Lady of the Lakes in Miami Lakes.
At 45, Cissy Brady-Rogers of Los Angeles is too young to have any memories of her grandmother’s famous brother, but she grew up hearing about him.
“When I was a kid we always had those little scapulars around the house, and I remember how we took all the little pieces of cloth (from his habits) and sewed them together to make a beanie for whoever was sick to wear,” recalled Brady-Rogers, a member of St. Robert Bellarmine Parish in Burbank, Calif.
Joe Foran, 54, traveled to Detroit from Cork, Ireland, along with his wife, Vera, to take part in the novena. Foran said Father Casey is not well known in Ireland, the country of his parents’ birth, but he knew of him from his late sister, Elizabeth Breen, who had lived in New York City a number of years.
“From the time she first heard his story, everybody my sister met she told about Solanus Casey,” Foran said.