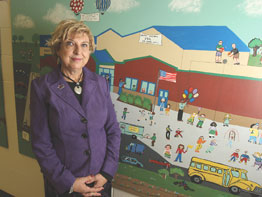 Beth Hazel’s cause requires urgency that goes beyond a single month’s focus.

While October is Breast Cancer Awareness month, Mrs. Hazel, a survivor, knows that the issue doesn’t disappear like falling leaves.

A parishioner of Our Lady of Perpetual Help in Ilchester, Mrs. Hazel is still recognizable on media platforms ranging from billboards to Web sites, professing the benefits of St. Agnes Hospital and its renown for rapidly detecting and treating breast cancer.

“Between my job and the campaign,” Mrs. Hazel said earlier this fall, “I’m swamped.”

A kindergarten teacher at Deep Run Elementary School in Elkridge, Mrs. Hazel had her rhythm disrupted in August 2006, when a biopsy showed that she had breast cancer.

As Mrs. Hazel, 55, explains it on the hospital’s “DaysNotWeeks” Web page: “At the St. Agnes Breast Center, I received my biopsy results in less than three days, and before I knew it, I had a plan. Everyone at the hospital gave me their undivided attention.”

After taking two weeks to get her kindergarten class in a routine for a permanent substitute, she missed most of the 2006-07 school year while undergoing eight chemotherapy treatments over a 16-week period.

In addition to faith, her support system includes fellow teachers; her husband, William; adult children Kelly and Laura; a dog named Dixie; and the staff at St. Agnes.

“The campaign is DaysNotWeeks, but I don’t want to give the idea that you’re rushed through the hospital,” Mrs. Hazel said. “You get the care you need, and the time you need.”

She had no idea how extensive DaysNotWeeks would become when she was recruited to be one of its faces.

“Someone told me it was going to be a big campaign,” Mrs. Hazel recalled. “I said, ‘Oh, OK,’ not thinking it would be that big a deal. I had no idea it would involve photo shoots and video interviews.”

A single phone call made her understand its value.

“I got a call from a woman who heard me on a radio spot just after receiving a diagnosis,” Mrs. Hazel said. “I’ve been put in a position where I can help people, spread the message that it’s better to address it sooner rather than later. This is my way of giving back to the hospital. I’m so appreciative of what they’ve done.”

She knows how to captivate an audience, whether it’s a regional message about the importance of annual mammograms, or reminding 5-year-olds to use their inside voice.

“I don’t know if it (surviving breast cancer) has made me a better teacher,” Mrs. Hazel said, “but it did make me want to get back to my students. In a classroom, you have to be up, no matter what’s going on in your life.”