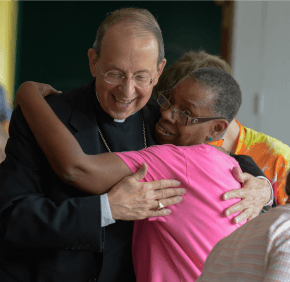 By Kevin J. Parks
kparks@CatholicReview.org
SPARKS – When he entered the chapel to serve Mass at the Monsignor Clare J. O’Dwyer Retreat Center Aug. 8, Archbishop William E. Lori was greeted with hugs and applause from adults with special needs attending the week-long Camp GLOW (God Loves Our World) at the campus in northern Baltimore County.

Begun in 1979 and sponsored by the Archdiocese of Baltimore, Camp GLOW is a residential summer camp providing swimming, yoga, arts and crafts, bingo, pizza parties and other activities. Campers are also provided spiritual growth through the use of picture Bible study.

“For many who attend, this is their only vacation,” said Deacon William Fleming, director of Camp GLOW and the archdiocesan Office of Special Needs Ministry.

Camp GLOW volunteer and Sacred Heart of Mary, Graceland Park parishioner, Ronnie Meusel, brings a smile to one of the campers prior to a Mass  celebrated by Archbishop William E. Lori at the Monsignor Clare O’Dwyer Retreat House in Sparks August 8. (Kevin J. Parks/CR Staff)
He noted that 80 percent of the campers come from group homes.

In some instances, according to Deacon Fleming, families of loved ones who attend Camp GLOW use the opportunity as a respite from the challenges of caring for a loved one with special needs.

The highlight of camp is the Thursday talent show, where campers display their creativity, including singing and dancing. One camper had the ability to recite the alphabet backwards from memory.
Camp GLOW’s volunteer staff provides 24/7 companionship and support for approximately 120 campers over four sessions this summer: June 5-10; July 17-22 and Aug. 7-12 at the O’Dwyer Retreat Center. A fourth session is scheduled for Aug. 15-19 at the Hickory Environmental Center in Garrett County.
While a camp application must be submitted, there is no charge to attend. The Archbishop’s Annual Appeal, along with the generosity of the Knights of Columbus, Order of the Alhambra and other sponsors covers the $80,000 annual operating cost Camp GLOW.