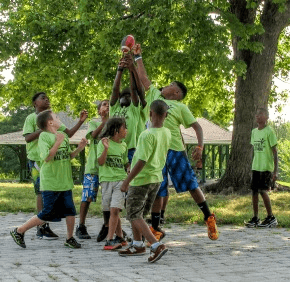 With Baltimore City declaring a “Code Red Heat Advisory” for July 25 and temperatures forecast into the 90s for the rest of the week, the Archdiocese of Baltimore is feeling the heat.

“Obviously, you have a lot more water breaks than you normally would,” Byrom said.

He added that the training staff has been “very proactive,” taking bags of ice out to the fields and keeping close tabs on the athletes.

Byrom said that the older campers, who are practicing in the afternoons, are taking the heat more in stride than the kindergarten and elementary-school aged kids.

“They want to be in the pool with their buddies,” Byrom said, “but get them out of the shade, get them a Gatorade, and they’re good to go.”

It’s the same story at Notre Dame Preparatory School in Towson, where athletes are honing their soccer and tennis skills this week.

Athletic Director Jamie Smith echoed Byrom’s “frequent water breaks,” and also noted that soccer athletes were spending some of their time on the school’s grass field, which doesn’t get quite as hot as the artificial turf field.

“I don’t recall it being quite as hot as it is today, in recent memory,” Smith said July 25, “but every summer you’re going to get a couple days here and there that are close to this.”

While campers at Notre Dame Prep and Spalding battle the heat outdoors, participants at a National Cheerleaders Association camp hosted by The Catholic High School of Baltimore are battling it indoors.

“We had to adjust a bit because the gym is not air-conditioned,” said Kari McBride, athletic director at Catholic High. “It’s brutal in there right now.”

Instead, the cheerleaders are mostly practicing in the school’s auditorium, she said, and heading into the gym for “short spurts” when they need to use the cheering mats for activities such as tumbling.

“We’re also taking lots of water breaks and educating the girls about nutrition, making sure they’ve eaten breakfast,” she added.

The sun beats down on athletes and traditional campers alike.

Camp St. Vincent, a summer camp serving homeless kids, typically utilizes Baltimore City’s Patterson Park throughout the day. On Code Red days, however, the camp, run by St. Vincent de Paul of Baltimore, makes more use of the Head Start building at Patterson Park Avenue and Gough Street, directly across the street from the park.

“In heat like this, we bring a lot of our programming inside,” said Jennifer Summers, vice president of development and marketing for St. Vincent de Paul.

The kids will still swim in the Patterson Park pools, a regular camp activity, and may get extra pool time if there is space available during the afternoon free swim time, Summers added.

“If not, we’ll set up some sprinklers in our outside play area,” she said. “We try to modify our day a bit to adjust to the heat, but we still try to get camp in as best we can. We try to take each day as each day.”

When one teaches, two learn at summer camp for homeless kids