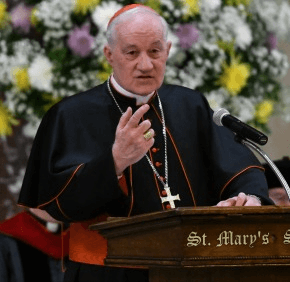 By Christopher Gunty
editor@catholicreview.org
In October 1791, five men began studies for the priesthood at the first seminary in the United States, just a couple years after the Diocese of Baltimore was established as the first in the country in 1789.
At the time of that humble beginning – when Bishop John Carroll, Baltimore’s first bishop, welcomed four priests from the Society of St. Sulpice and the five seminarians – the Diocese of Baltimore encompassed the whole fledgling nation.
Sulpician Father Phillip J. Brown, president rector of today’s St. Mary’s Seminary and University, noted in his welcome to commemorate that occasion that the seminarians began their studies at St. Mary’s downtown on Paca Street, a month before Georgetown University in Washington, D.C., opened, making the Baltimore seminary the oldest American institution of higher learning. The remark brought a chuckle of pride from the congregation gathered Nov. 15 in the seminary’s chapel to mark the 225th anniversary of the arrival of the Sulpician Fathers in America and the founding of St. Mary’s Seminary and University.

St. Mary’s Seminary and University President-Rector, Sulpician Father Phillip J. Brown, welcomes guests to the conferring of the Honorary Doctor of Divinity upon the Prefect for the Congregation of Bishops, Cardinal Marc Ouellet Nov. 15 at St. Mary’s Seminary and University. (Kevin J. Parks/CR Staff)
The prayer service included the conferral of an honorary doctorate of divinity degree on Cardinal Marc Ouellet, former archbishop of Quebec and now prefect of the Congregation for Bishops at the Vatican.
Father Brown welcomed the faculty and students of St. Mary’s and two other seminal Sulpician institutions – the Theological College, the Sulpician national seminary at The Catholic University of America in Washington; and Mount St. Mary’s Seminary and University in Emmitsburg, which was originally a Sulpician college seminary and eventually became an independent major seminary.
“St. Mary’s has formed more priests for the mission in parishes than any other (seminary) in the United States,” Father Brown said.
He prayed that the Holy Spirit would “give many more men the courage and confidence to follow the call to priesthood for the good of the whole church so that it will be renewed and strengthened during the time of our service and in our lifetime.”
Father Brown noted that each of the seminarians and faculty members present that evening would receive a copy of a new biography of Father Francois Charles Nagot, the first Sulpician superior in the United States, who played a role in the founding of each of the three seminaries represented at the anniversary celebration.
Sulpician Father John C. Kemper, provincial superior of the U.S. province of the Society of St. Sulpice,  said, “The first decades or so were difficult for this initial band of Sulpicians, yet motivated by what their founder, Father Jean-Jacques Olier, called ‘the apostolic zeal,’ the Sulpicians pressed on.”
He said the new seminary in Baltimore found itself to be “a launching pad for missionaries to the new land of the United States.”

Graduates of the seminary went off to establish parishes in uncharted and hostile areas of the country. Many Sulpicians were called to leadership in the new Catholic Church in the United States, including the third and fifth archbishops of Baltimore, Archbishops Amrose Marechal and Samuel Eccleston.

Father Kemper noted that the apostolic zeal that Father Olier encouraged finds new expression in each age.
Cardinal Ouellet has connections to the Sulpicians as well, having studied for the priesthood in Montreal, and learning Spanish along the way. In the early 1970s, he taught philosophy at the major seminary in Bogotá, Colombia, which was directed by the Sulpicians, and he joined the Society of St. Sulpice soon after his arrival there.
In his talk, titled, “Toward the Renewal of the Priesthood in Our Time,” the cardinal said he chose the topic given the central role the priesthood plays in any reform of the church.
After the event, the cardinal told the Catholic Review that his seminary formation was decisive for his encounter with Jesus Christ. “I remember the seminary in Montreal was the place where I experienced really deeply my faith.” In the 1970s, the Sulpicians sent him for further studies in dogmatic theology.
In his talk, he quoted the conciliar document “Lumen Gentium,” on the topic: “Each of them in its own special way is a participation in the one priesthood of Christ.”
Reflecting after the prayer service, Cardinal Ouellet said that formation is as important for lay people – perhaps even more important – as it is for priests. “I spoke of the interrelatedness of both participations in a deep ecclesiology, which is missing normally when we hear the speeches on that,” he said, speaking of the common priesthood of the laity and the ministerial (ordained) priesthood.
He said that priests are so important because they are the heart of the church. “They are in the field. That’s why I wanted to deepen the question of the priesthood, because they are important.”