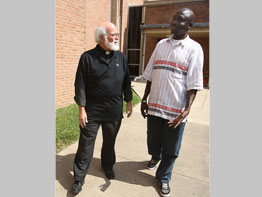 Renounce your Catholic faith, his boss said, and convert to Muslim. James Okeny refused, and lost his job as a result.

Kill others in southern Sudan, the government of that African nation told him. Mr. Okeny would not, and ended up in an underground jail cell.

You can’t have your passport back, an official in Egypt told him. Mr. Okeny prayed, then asked the official, “Do you know God?” Yes, came the reply.

Mr. Okeny got his passport back.

His is a life filled with miracles, says Mr. Okeny, 41, as he sits in the late-summer sunlight streaming through the window at the rectory at St. Matthew, Northwood, recalling the arduous journey that brought him from war-torn Sudan to Baltimore.

The constants – faith, prayer and the church – have guided him, inspired him and sustained him, Mr. Okeny said.

He clung to his Catholic faith in 1996 while working as a purchaser at a Sudanese trucking company. A Muslim, his boss told him: “I give you whatever you want. Please, I just want you to be a Muslim.”

But Mr. Okeny replied, “I can’t sell my faith for money.”

In 1998, he found the light of God’s presence inside a jail cell where the only sunlight came through a two-inch hole, and the guards beat him with a belt because he had said he would not fight against rebels in southern Sudan.

“When you pray and you pray to God, God can do everything for you,” he said. “The presence of God is everywhere.”

Sudanese authorities gave him two weeks to change his mind. Some who didn’t were tortured and killed, so he agreed to fight and was set free, but instead began his circuitous route of escape from his hometown, Khartoum, to America.

He became part of a mass exodus of more than 4 million southern Sudanese, fleeing a civil war that has caused at least 2 million deaths.

In 1999, Mr. Okeny boarded a train from Khartoum to another city in southern Sudan. His wife and children cried when he told them he had to go alone, because taking them would be too risky.

Months later, after taking a boat to Cairo, he reunited there with his wife, Pamela, and two of his four children, George and Elvis.

A resettlement center for refugees and Lutheran Social Services helped get Mr. Okeny, his wife and two of his children to America in July 2000, but the couple’s two other children, Peter and Estella, made it here only this year.

St. Matthew, where the family worships, prides itself on welcoming immigrants.

Inside the church hang 40 flags. Each represents parishioners’ native countries, including Kenya, Jamaica, the Sudan and Puerto Rico. Kenyan and Sudanese choirs sing at events. Newcomers introduce themselves and say where they’re from, as many did in Catholic churches in their native countries.

“I really think that St. Matthew has a lot to teach the country and the world about how people can get together and pray together and eat together and share their lives,” said Father Joseph L. Muth Jr., pastor.

A few weeks after Mr. Okeny arrived, St. Matthew got permission from a nearby apartment complex to have a picnic there, then notified residents. Iraqis and Sudanese played soccer. Mr. Okeny translated Father Muth’s prayers to Arabic. Christians and Muslims held hands and prayed together.

Today, Mr. Okeny counts his blessings. He lives with his wife and children in a three-bedroom apartment near St. Matthew. He supports his family by working two jobs, as a counselor for the nonprofit People Encouraging People and as a salesman at Burlington Coat Factory.

In the Acholi language spoken in parts of southern Sudan, it means “Blessing.”