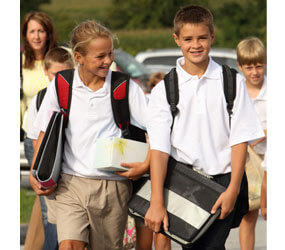 CLARKSVILLE – As Linda Wilson waited in the main hallway of Clarksville’s St. Louis School on the morning of Aug. 25, she couldn’t contain her enthusiasm.

Children ran up to her on the first day of school and hugged the longtime kindergarten teacher who provided the building blocks of their Catholic education.

“I love it here,” Wilson said. “I think it’s the best school ever. I love the first day of school. I just think it’s exciting. It just makes all your sense come alive – the smells, the sounds – it’s just awesome to see the kids come through the door.”

Zeal was everywhere at St. Louis, a school of nearly 490 students that is thriving in Howard County. First day of school excitement took place in the last week of August and the first week of September in classrooms across the Archdiocese of Baltimore.

Principal Terry Weiss is starting her 15th year at St. Louis, and parents, teachers and students said her leadership draws them to the school.

Weiss said the start of the school year is a unique experience.

“It’s the crisp new uniform, the new shoes … it’s looking at the kids and seeing the excitement on their faces,” Weiss said. “You can also see in their eyes the excitement of ‘What am I going to learn this year?’You can tell they’re really excited what’s going to happen this year. It’s my favorite day.”

“I’m always excited about going into a new grade,” Ben said as his mother, Courtney lovingly looked on. “I actually have no idea what you learn in second grade.”

Before the first day, Weiss and her staff made last minute tweaks to classrooms and hallways because, as the principal said, “you want the students to come in, look around and go, ‘Wow.’”

At St. Louis, new programs abound, including a Lego club to foster engineering passion. St. Louis, already a school that contributes greatly to the community at-large, is starting a service club. Every teacher comes up with two service projects in which their classes can participate.

New programs to challenge students who are excelling in specific subjects are being piloted as well.

Monsignor Joseph L. Luca, pastor of St. Louis, is exceedingly supportive and an ideal partner in education, Weiss added. Father Gregory Rapisarda, associate pastor, will serve as the school chaplain and will hold class Masses. The school goes to Mass every Tuesday.

“We are called to see Christ in each other,” she said. “We want people to know Christ is the reason for this school. Religion is not just a subject that’s taught. Religion permeates every subject area.”

About 90 children were added to the school this year. Contributing to the influx was the significant addition of pre-K and kindergarten students. As always, there are transfers.

With all of the new families joining the community, the school has rolled out the welcoming mat. A group of parents called the Sunshine Committee arrange meet-ups and play dates for new families with current ones. In their first week of school, new students would be treated to a lunch and recognized at the opening assembly.

Longtime families cherish the school. Hope Marlo’s oldest son, Stephen, graduated this past spring while younger son Michael is in fourth grade. Staff have steadfastly helped Michael with a learning disability and encouraged the faith life of her children.

“I love this school,” Marlo said. “You never feel like you’re alone. It’s a good Christian foundation and I wouldn’t trade it for anything in the world.”