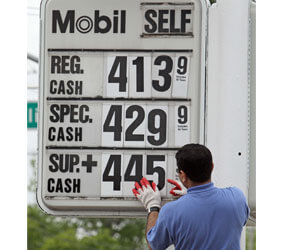 WASHINGTON – Excessive speculation in crude oil futures on the part of financial traders added 83 cents to the cost of a gallon of gasoline in May, two University of Massachusetts professors reported.

The finding by Robert Pollin and James Heintz of the Political Economy Research Institute at the University of Massachusetts, Amherst showed that the influx of billions of dollars chasing oil futures led the average price of a gallon of gasoline nationwide to rise to $3.96 in May.

Pollin said if normal market forces, traced over decades, were in play, a gallon of gas would have cost $3.13 in May.

The revelation raised concerns among faith-based and public interest advocates that poor families worldwide are being further pinched because they are faced with using a larger share of their limited income for food and basic necessities.

“The problem is through the investment in commodity derivatives, (the speculators) are directly contributing to the increase in prices of gas and food around the world,” explained David Kane, a staff member at the Maryknoll Office for Global Concerns in Washington, which is part of the Americans for Financial Reform coalition.

“The price of gasoline in the U.S. affects poor people more than it does affect rich people,” he told Catholic News Service. “But the travesty is for people living on $1 or $2 a day who are spending a huge percentage of their income on food. So when food and gas prices go up, they are much more directly affected … much more than we probably feel it here in the U.S.”

Pollin said the study, “How Wall Street Speculation Is Driving up Gasoline Prices Today,” traced the rapid rise and fall of commodities in recent months to the lack of regulation of financial markets.

“I’m not saying the speculators themselves are immoral people. They’re just working within the market. It’s up to the government regulators to establish rules to address the issue,” Pollin said.

The findings have led to a renewed call from advocates for robust rules that limit the actions of speculators, traders and investors under the Dodd-Frank Wall Street Reform and Consumer Protection Act passed a year ago.

Praised by consumer advocates, the law called for specific limits on trading in commodities markets among other practices of the U.S. financial industry. But the full impact of the law has been blunted, Kane said, because the Commodities Future Trading Commission, the federal rule-making body responsible for implementing it, has not yet adopted the necessary rules.

Although the commission was given a year under the law to adopt the rules, it announced in early June that it needed at least another six months to complete its work.

Kane expressed disappointment at the commission’s inaction during a June 28 teleconference with media and pressed the commission to act immediately.

“Every day the CFTC delays this is another day of hunger and suffering for hundreds of millions of people around the world,” he said.

Americans for Financial Reform member organizations in a dozen cities distributed the report June 28 during news conferences, vigils and demonstrations at gas stations and outside of the offices of major financial firms. Events were planned in Little Rock, Ark., San Francisco, Orlando, Fla., Boston, Chicago and elsewhere.

In New York, representatives of faith-based groups involved in the responsible investing movement planned to lead a vigil at the Irish Hunger Memorial in front of the New York Mercantile Exchange, where oil commodity futures are traded.

Joining the effort were Kane’s office as well as the Tri-State Coalition for Responsible Investment, an alliance of Roman Catholic institutional investors primarily located throughout the New York metropolitan area, and the Interfaith Center on Corporate Responsibility.

Oil prices peaked at more than $115 a barrel in late May, the height of oil futures trading, but have fallen significantly since. The price closed June 28 at just below $93 a barrel on the New York Mercantile Exchange on oil to be delivered in August.

Gas prices fell to an average $3.57 a gallon nationwide by June 27, according to data compiled by the U.S. Energy Information Administration. Weak demand because of high prices and the lackluster pace of economic growth worldwide were largely to blame for the drop by energy analysts.

Recent decisions by the United States and the 28 member nations of the International Energy Agency to release 60 million barrels from strategic reserves lessened trader interest in oil and were expected to pull gas prices downward at least through July.

The study also refuted claims that uprisings across the Middle East caused oil production to wane, leading to higher gas prices at the pump. Pollin and Heintz found that total global crude oil production averaged 87.6 million barrels per day between September and December and 87.9 million barrels per day during the period of January through March, in the midst of the uprisings.

The report by Pollin and Heintz is available online at www.peri.umass.edu/fileadmin/pdf/research_brief/PERI_AFR_Research_Brief_June20.pdf.