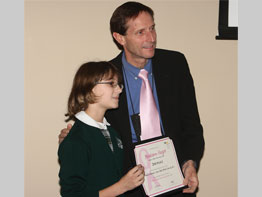 With nervous quick reads and high voices behind a podium almost taller than most of them, students from four Catholic schools read aloud their winning essays Dec. 4 in the “How a Woman I Love Takes Great Care of Me” student essay celebration sponsored by Good Samaritan Hospital, Baltimore.

Honoring moms, grandmoms, great grandmothers, aunts, and in one case, a sister, fourth- through eighth-graders prompted tears from the audience with sentences like, “I am mommy’s number one fan,” by Brea McAlily, a fifth-grader at Mother Mary Lange Catholic School, Baltimore, who attend in full uniform with school sweater and saddle shoes.

“She will never stop loving me,” read Sara Pugh, a fifth-grader at St. Pius X School, Baltimore. “I pray every night for all the kids in the world who don’t have moms. I’m very thankful Jesus gave me my mother.”

Madison Hager compared the close bond she shares with her mom, Julee Hager, to “two cans and a string.”

The children receiving recognition certificates, savings bonds and a handshake as they posed for photos with hospital president Larry Beck, who sported a pink tie for the ceremony. The contest was held in honor of breast cancer awareness month in October. Large pink ribbon balloons floated about as families in the audience applauded the essays.

The winners were chosen out of 400 essays submitted by public and parochial students.

The women honored, some breast cancer survivors, were presented with poinsettias and goody bags.