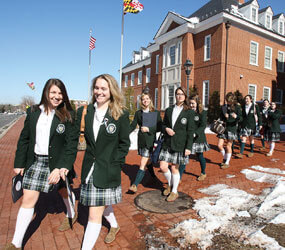 About 500 Catholic and private school students, parents and teachers lobbied state officials March 4 with the hope of securing support for a crucial education bill.

The Building Opportunities for All Students and Teachers in Maryland (BOAST) measure, identified as House Bill 1259 and Senate Bill 715, is to be discussed in the House Ways and Means Committee March 10 and in the Senate Budget and Taxation Committee March 11.

Held at the Miller Senate Office Building, the BOAST legislative reception aimed to give voice for 131,000 students enrolled in nonpublic schools. The BOAST bill provides businesses a tax credit against the state income tax for contributions made to an eligible educational scholarship organization or innovative public educational organization.

Dr. Ronald J. Valenti, superintendent of Catholic schools for the Archdiocese of Baltimore, is a staunch BOAST supporter.

“The concept of the bill is that it benefits both public and nonpublic schools,” Dr. Valenti said. “The beauty of this particular bill, where we are economically, is this gives us another revenue stream where we can help support our students. It also provides an opportunity for parents, that their ability to make a choice is going to be supported by some kind of financial assistance.”

Students walked the streets of the Maryland capital and hallways where the state’s politically powerful roam.

During a brief meeting in the office of Del. Stephen W. Lafferty (D-Baltimore Co.), students from Immaculate Conception School in Towson found themselves on the receiving end of probing questions about the financial impact of the bill.

“We as parents pay our taxes, too,” Mrs. Bull said.

“I’ve never done anything like that,” Lauren said of her activism, “but I know it’s important.”

Sen. James E. DeGrange (D-Anne Arundel Co.), the bill’s sponsor in the senate and a parishioner of Holy Trinity in Glen Burnie, said he believes “this is the year” for “this very important bill to pass.”

Sen. DeGrange cautioned that the Maryland State Teachers Association could sway politicians to oppose the bill with the contention that it benefits more private schools than public.

Ellen Robertson, the associate director of education and family life for the Maryland Catholic Conference, said the current economic crisis could be another potential roadblock.

“This year is tough for anybody,” she said.

No matter the fate of the bill, she wants students to know they are important.

“We can effect change,” she said. “In some ways this was challenging for the students, but it was important for them to see how the process works.”