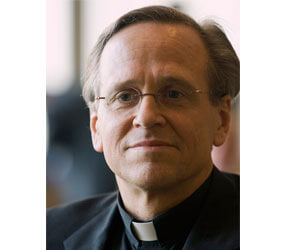 WASHINGTON – After a year of public clashes between bishops and some Catholic colleges, U.S. Catholic university presidents were urged to forge stronger relationships with their local bishop.

During his plenary address Jan. 31 at the annual meeting of the Association of Catholic Colleges and Universities in Washington, Cardinal Theodore E. McCarrick told college presidents they should reach out to their bishops for more than just good will.

The 79-year-old retired archbishop of Washington – a former college president himself – told the presidents they would get better cooperation from their dioceses and experience less friction with the hierarchy if they welcomed their local bishops onto campus and included them in the academic fold of their institutions.

Though he never mentioned the 2009 controversy over the commencement address by President Barack Obama at the University of Notre Dame in Indiana, Cardinal McCarrick alluded to it in his address. He said it is “naive” for college presidents to believe they can invite to campus speakers who advocate divisive positions on abortion and same-sex marriage contrary to church teaching and expect a productive debate.

The decision of Holy Cross Father John I. Jenkins, president of Notre Dame, to invite Obama to deliver the May commencement speech and present him with an honorary law degree set off a firestorm of criticism by at least 70 U.S. bishops, and ignited a national debate on the university’s status as a Catholic institution.

Critics said Obama’s support of legal abortion and embryonic stem-cell research made him an inappropriate choice to be commencement speaker at a Catholic university.

Bishop John M. D’Arcy, the recently retired bishop of Fort Wayne-South Bend, Ind., the diocese which includes Notre Dame, boycotted the commencement. It was the only one he missed during his long tenure as leader of the diocese.

Other public disputes between a bishop and Catholic college included criticism by now-retired Bishop Joseph F. Martino of Scranton of Misericordia University’s decision to invite a gay rights advocate to speak on campus. Also, the University of San Francisco angered some Catholics by giving Irish President Mary McAleese an honorary degree. She has publicly supported gay rights and women’s ordination in the Catholic Church.

Cardinal McCarrick, who from 1965 to 1969 was president of the Catholic University of Puerto Rico, said the nation currently has a polarized “partisan society.” But the U.S. bishops should be optimistic about Catholic higher education, he said, and if they are not, they “don’t know what is going on” academically or spiritually on the campuses.

But he also said the college presidents should be making an effort to include the local bishops in the campus community. They would find the bishops to be formidable advocates if they felt like they belonged, he said.

Father Jenkins told Catholic News Service Jan. 31 that Cardinal McCarrick was absolutely right on this point and set the “right tone” with the college presidents. The priest said he was laying the foundation for a solid relationship with newly installed Bishop Kevin C. Rhoades of Fort Wayne-South Bend.

“Our bishop is coming to campus Feb. 8 and 9 – it was the earliest date we could get him – and we’re going to have a Mass at the basilica with our Holy Cross community and I will speak with him at that time,” he said. “I think we will make every effort to build those bridges, to deepen that dialogue, to strengthen what is a common goal.

“I mean that’s the thing, we have a common goal,” he continued. “We may disagree on this or that particular, but the common goal and how we can achieve that goal more effectively, is (for the greater) good and I’m committed to it. I’m so pleased with Bishop Rhoades and his willingness to talk and engage.”

Father Jenkins acknowledged his relationship with Bishop D’Arcy had been strained in the last months of his tenure over the Obama controversy. But he also said they still agreed on more topics than they disagreed.

He said he regretted the dissension the Obama address created. But he is convinced the president left Notre Dame with a deeper appreciation of the pro-life movement and that a small step may have been made in dialogue on the issue of abortion.

Other Catholic college presidents agreed that it’s in their best interest to create meaningful relationships with the bishops of their dioceses. They said the 2009 public quarrels between university leaders and bishops – most notably Notre Dame – was the topic most discussed at the Jan. 30-Feb. 1 ACCU meeting.

Mary Pat Seurkamp, president of the College of Notre Dame of Maryland in Baltimore, said her institution had been confused with the Indiana university during the Obama controversy and received many angry e-mails about it. But she expressed confidence that any acrimony between the bishops and Catholic academic world will dissipate with time and that allegiances would flourish in the future.

“I think (all) of us know that when you are in highly charged arenas and when there are difficult issues to be discussed, the more public they are the more difficult it is to work through them,” Seurkamp said. “So, if you can create the environment where people can really have serious conversation, where they are focused on trying to find a solution, that’s what was needed in (the University of Notre Dame) situation. Not to have all of this public attention and outcry on both sides, that really didn’t serve to help fruitful discussions in any way.”

Richard A. Yanikoski, president of the Association of Catholic Colleges and Universities, said one lesson learned in 2009 is to keep frustration about political outcomes in its proper forum.

Internal Revenue Service restrictions bar tax-exempt organizations, including churches, from speaking publicly about candidates in a campaign, though they can talk about issues, he explained.

“So, in a way,” he said, “the situation that arose at Notre Dame created the first national flash point for a whole lot of people who wanted to comment specifically on Barack Obama to do that at the expense of the commencement at Notre Dame.”