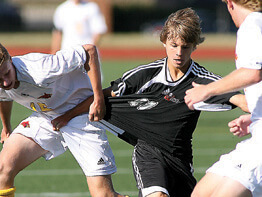 The defending MIAA A Conference soccer champs, the Archbishop Curley High School Friars, kicked their 2007 season off on Aug. 31 with a 5-0 win over Bullis School to open the Adidas Soccer Challenge.

From there, the Baltimore school’s Friars reeled off an impressive 10-0 overall record going into the Sept. 19 Alumni Cup against MIAA A Conference opponent Calvert Hall College High School, Towson.

But the Friars, not as deep as teams in past years, came out flat and lost to the Cardinals 2-1 in regulation.

In fact, according to head coach Barry Stitz, it was a pattern that the Friar coaching staff saw unfolding for days, right before their eyes.

And despite the chalk talks and pep talks, the Friars maintained a come-from-behind style of play, seen in their Chestnut Hill Tournament overtime victory on Sept. 15 and then again on Sept. 17 in a 1-0 win over Archbishop Spalding High School, Severn.

“You can’t play a half of a game of soccer and expect to win,” said Stitz, commenting on the Friars’ loss to a very determined and well-coached Cardinals team. “You can’t expect to pull it out every time.”

Stitz is perplexed. Though the physical make-up of the team is smaller and the team is younger, this 2007 squad is more skilled than teams before them; but according to the veteran coach, “the team lacks fire and competitiveness. I’m looking for more leadership.”

Fortunately, the Friars’ team chemistry is good this season, led by team captains John Connolly, a junior goalie and three-year starter, and senior midfielder Ryan Foehrkolb. However, what’s it going to take to get the Friars to win a higher percentage of their 50-50 balls, execute their corners with greater finesse and success, and take charge of their transition game?

The Friars are stacked with sophomore superstars starting with defender Oumar Ballo, midfielders Aaron Beale and magic man Bash Kamara, the team’s leading scorer, supported by Mikias Teketele. In fact, it was Kamara’s lone goal that was scored by the Friars in the Alumni Cup game.

Commenting on the desire of one player in particular, Stitz reflected on the speed and determination of Oumar Ballo. “Oumar could get a game going out on the parking lot and play just as hard there as he plays every game on the field.”

“Also stepping up for us this season is junior midfielder Cesar Ramos,” said Stitz. “He is very talented and he needs to recognize his impact on this team. He likes the supporting role, but we need more from him.”

The Friars look to get back on the winning track against the Mount St. Joseph High School, Irvington, Gaels on Sept. 25.