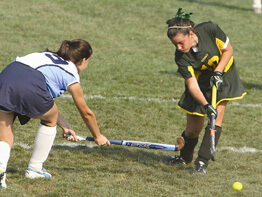 A disappointing start to an otherwise hopeful season, The Catholic High School of Baltimore Cubs dropped their first field hockey league game on Sept. 6 to St. Timothy’s, Stevenson, 1-0 in overtime on a penalty flick.
The team is coached by Anne Winters, a theology teacher at the school, who brings knowledge and a big dose of enthusiasm to the table. Winters has been a field hockey advocate since her sophomore year at St. Mary’s High School, Annapolis, when the field hockey program got underway.
For the 2007 season, the goal is manageable – to raise their finish from eighth place (2-14 in 2006) to sixth place by the end of the season. After several sessions of skills work this summer, the Cubs’ coach had a good number of students try out for the team and had to make cuts for the first time in the program’s history.
The 18-member varsity squad is led by co-captains, Hannah Korbach, a senior and junior goalie Katie Rommell, both of whom emerged as solid leaders for the Cubs, competing in the C Conference of the IAAM.
Stepping up for the Cubs is senior center midfielder Christine Gutowski who is solid when controlling the ball. “She is amazing and can do anything, anywhere. She works miracles,” said Winters, commenting on Gutowski’s ability to avoid obstruction with her 360-degree move to avert the defense.
Defensively, sophomore Sarah Winters and senior Marie Geiman effectively and efficiently handle the backs’ role.
In addition, the Cubs acquired several key freshmen including, Katie Johnston who has made a big impact as a left-side middie. Johnston is supported by an offensive-minded sophomore, Taylor Opperhauser, whose deep drives and flat passes compliment her clean and accurate shots on goal.
Against St. Timothy’s, the Cubs got off eight shots on goal, all wide of the goal.