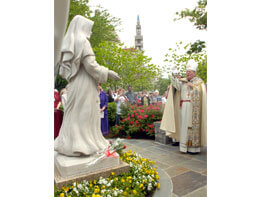 WASHINGTON – Hundreds of pilgrims from across the country joined the Sisters of Providence of St. Mary-of-the-Woods, Ind., for the dedication of a life-size sculpture of their foundress, St. Mother Theodore Guerin, at the Basilica of the National Shrine of the Immaculate Conception in Washington May 10.

St. Mother Theodore is the newest U.S. saint, the eighth from this country and the first saint from Indiana. She was canonized by Pope Benedict XVI Oct. 15, 2006.

The sculpture, made of Indiana limestone, is located in Mary’s Garden, which is behind the shrine. It honors Mary and other women saints.

Archbishop Pietro Sambi, apostolic nuncio to the United States, celebrated the dedication Mass in the shrine’s crypt church. Following the Mass, the dedication of the statue took place at the garden.

Pilgrims who attended included Sisters of Providence, alumni of schools founded by the sisters, and others who had some connection to the religious order founded by St. Mother Theodore.

Sister Nancy Reynolds, a member of the general council for the Sisters of Providence, said three buses brought pilgrims from Chicago, Indianapolis and St. Mary-of-the-Woods.

Before Mass began, one pilgrim, Judy Curtin, said in an interview that she traveled from Rochester, N.Y., for the statue’s dedication. Curtin graduated from St. Mary-of-the-Woods College in Indiana, founded by the Sisters of Providence. She also earned a graduate degree in theology there.

“The word providence means a lot to me,” she told the Catholic Standard, newspaper of the Washington Archdiocese. “Things happen for a reason and Mother Theodore teaches us about (God’s) providence.”

Another pilgrim, Mary Jayne Pugh, attended a school sponsored by the Sisters of Providence in Southern California.

“I’ve been devoted to the Sisters of Providence since they taught me in high school,” Pugh said. She added, “I just wanted to finish my pilgrimage,” noting that she had attended St. Mother Theodore’s canonization in Rome.

Monsignor Walter Rossi, rector of the national shrine, said that it was “so appropriate that we celebrate this Mass here in the crypt church,” where Pope Benedict celebrated a vespers service with the U.S. bishops during his recent visit.

During the homily, Archbishop Sambi said the dense forest adjacent to a remote community known as St. Mary-of-the-Woods near Terre Haute, Ind., “must have seemed like a world apart” from the industrial region of France where St. Mother Theodore had lived prior to founding her religious order.

The archbishop asked how it was possible the saint could leave the “comfort and security” of her home and settle in a rustic log cabin in Indiana.

“The answer is clear,” he said. “It was possible only because Mother Theodore was able to abandon herself to the divine providence.”

Archbishop Sambi also noted, “It is befitting that this joyful action is (in) some way linked to the great joy of Pentecost.” The feast of Pentecost was celebrated the next day, May 11.

The archbishop compared St. Mother Theodore’s experience of trusting in God’s plan to the early disciples and also to Abraham’s experience traveling to a new land.

Near the end of the Mass, Monsignor Rossi said one reason Mary’s Garden was chosen as the location for the statue was because the garden setting represented the woods in Indiana that St. Mother Theodore loved.

As the rain stopped and the sun came out in time for the dedication ceremony, Monsignor Rossi said the sunshine was proof of the intercessory power of saints. As the pilgrims made their way along the path to the garden, one person said, “This is showing us what Mother Theodore can do – hold off the rain.”

During the dedication, children placed flowers in front of the statue. Archbishop Sambi said the dedication ceremony was the first gathering at which he had presided since the pope’s visit in April. He said the ceremony should be a “time for a new usefulness, for a new springtime and for a new Pentecost.”

As a closing hymn, participants sang “Our Lady of Providence,” a traditional song for the Sisters of Providence that many gathered there remembered from their high school or college days.

Teresa Clark, the artist who shaped the likeness of St. Mother Theodore for the statue, became a Catholic during the course of the project. She and her mother, Eloise Smith, were at the dedication ceremony.

Smith said her daughter walked through the woods and St. Mother Theodore’s graveyard to get the spirit of the saint. Smith also said at “times (it) felt like she (St. Mother Theodore) was telling her (Smith’s daughter) what to do.”

Today, 450 Sisters of Providence serve in 22 states, the District of Columbia, Taiwan and China.