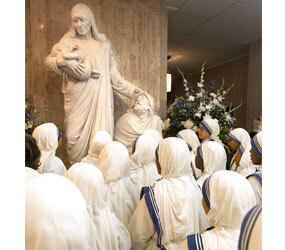 WASHINGTON – Near the Crypt Church of the Basilica of the National Shrine of the Immaculate Conception, in the Hall of American Saints, across from the papal tiara and the statue of St. Rose Philippine Duchesne stands a gleaming new white statue of Blessed Teresa of Calcutta.

With a smile on her face, Mother Teresa holds a baby in one arm and has her other hand placed lovingly on the head of a poor man crouched at her feet.

The statue – the newest addition to the national shrine in Washington – was the gift of an anonymous donor. It was made in Italy and the planning for it has been in the works for more than a year, according to Monsignor Walter Rossi, basilica rector.

A special dedication Mass was held Sept. 13 in the basilica’s upper church, followed by the dedication of the statue downstairs. A large portrait of Mother Teresa was displayed at the front of the church.

Numerous members of the Missionaries of Charity, the religious order founded by Mother Teresa in Calcutta, India, filled the front pews of the basilica for the dedication Mass, dressed in the order’s traditional white sari with the blue border.

In his homily at the Mass, Bishop Michael J. Bransfield of Wheeling-Charleston, W.Va., said “such a cross section of our country, a real mosaic of the Catholic faith” had come to the dedication.

Bishop Bransfield was the rector of the national shrine from 1986-2005 and was present at many of Mother Teresa’s visits to the shrine. “Without a doubt, among the most significant moments of that service were the times that Mother Teresa would visit the shrine,” he said.

Mother Teresa had a “phenomenal effect on so many in our country,” Bishop Bransfield said. The bishop noted how Mother Teresa found her life’s work, serving the poorest of the poor. On Sept. 10, 1946, she boarded a train to Darjeeling, India, for a retreat. It was on that train that God gave her the “‘call within the call,’ to satiate the thirst of Jesus by serving him in the poorest of the poor,” the bishop said.

Bishop Bransfield said that same vision Mother Teresa had is seen today “in every Missionary of Charity chapel throughout the world where the crucifix is powerfully displayed in the sanctuary and the words, ‘I thirst,’ are written next to it on the sanctuary wall.” The bishop said Mother Teresa’s answer to God’s call reflects the truth of the Gospel which manifests the idea that “faith in Jesus is linked to doing something for others.”

He told members of the congregation that they must reach out to others like Mother Teresa did. “Our faith in the Lord should lead us to care for those around us, especially the poor and those who have no one else to care for them,” he said. These “works of mercy … are essential in the life of the church,” he said.

In an interview with the Catholic Standard, Washington archdiocesan newspaper, Sandra McMurtrie, a good friend of Mother Teresa’s who was a lector at the Mass, said, “Mother was such a great part of our lives. She was just magnificent.”

While accompanying Mother Teresa on a trip to Mexico, McMurtrie met a little girl with Down syndrome at a home operated by the Missionaries of Charity and adopted her. In 2003 at the Vatican, her daughter, Maria Teresa Guadalupe McMurtrie, helped bring up the offertory gifts at the beatification Mass for Blessed Teresa of Calcutta, who was her godmother.

Patrick Arozario was born in Calcutta and attended Mother Teresa’s funeral there. At the dedication ceremony for her statue, he said he felt “blessed to be part of this ceremony.” Now a member of St. Camillus Parish in Silver Spring, Md., Arozario said he often returns to Calcutta and visits the late nun’s tomb.

Bala Thirumala Reddy, who is also originally from India and now lives in Morgantown, W.Va., attended the ceremony with 12 of his family members. “We are proud that (Mother Teresa) worked for the Indian people and the poor,” he said.

Thirumala Reddy noted that Mother Teresa reached out to all people, regardless of their religious affiliation. He said the statue is a symbol for her life, because she helped both the young and the elderly.