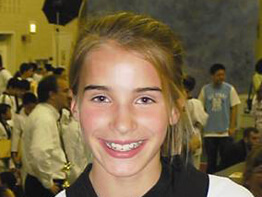 All the bar graphs on 10-year-old Anna Borkowski’s “Fitness Gram” are filled in solidly. And on the Pacer Test – the cardiovascular endurance portion of her school’s fitness test – the St. Ursula, Parkville, student broke the fifth-grade girls’ record.

“She’s amazing,” said running coach and physical education teacher Kim Altenburger, noting that the record has been in place during her 17 years at St. Ursula.

“Anna is very driven and motivated,” she said, explaining that the student is on the school’s cross country and track teams, plays soccer, and is a black belt member of a Taekwondo team. “She tries to excel. She has an inborn competitive spirit.”

When asked what motivates her, the lanky, dark blond student responded, “my heart.”
The martial art pushes her to get better, she said, and she likes attending different tournaments and meeting different people. She enjoys running cross country because her dad, Marc Borkowski, ran. And she likes winning first place with the top-ranked Baltimore Bays U10 girls’ club soccer team.

Anna was selected from a pool of 250 girls who tried out for the U13 squad in the Maryland Youth Soccer Association’s Olympic Development Program.

Mr. Borkowski will accompany his daughter to Greensboro, N.C., in July for the AAU Taekwondo Nationals where Anna will compete against 600 young people from all over the world. California will be the next stop a week later for the USAT Junior Olympics. Because of Anna’s intense involvement in Taekwondo, the Borkowskis have traveled to Croatia, Florida, Tennessee, Georgia and Missouri.

On Team Xtreme, an elite competition team from Baltimore, Anna competed at the April Korean Consul Championship in Gaithersburg, winning gold for both forms of Olympic sparring and the grand championship in sparring. She began Taekwondo at age 5 and practices five hours weekly.

Qualifying for soccer and Taekwondo in the Olympics is the young girl’s dream. “I want to show everyone what I can do,” said the Joppatowne resident who transferred to St. Ursula for the 2006-07 school year after attending St. Clement Mary Hofbauer School, Rosedale, since kindergarten.

“She has limitless hunger and passion for her sports and life,” said her mother, Beatriz Borkowski.