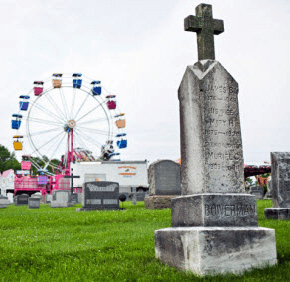 By Elizabeth Lowe
elowe@CatholicReview.org
Twitter: @ReviewLowe
BRADSHAW – St. Stephen parishioners generously opened their wallets and financed the parish’s new digital organ, which parish leaders say is characteristic of this faith community.
“They respond well, especially when they see the need,” said Father Lawrence F. Kolson, pastor of St. Stephen for nearly 20 years, who described parishioners as “giving people.”
The new organ, which cost nearly six figures and was installed in January, was tied into the parish’s 150th anniversary festivities this past year.
The Baltimore County parish began celebrating its 150th anniversary year last summer. Baltimore Archbishop William E. Lori is expected to celebrate the closing Mass, which is scheduled for June 30.
To navigate a slideshow from the event, click on the arrows below.
Interested in purchasing a photo? Click here.
St. Stephen’s first Mass was held in June 1863, three months after the church was founded, according to parish history. The parish school, founded in 1931, has about 340 students in pre-K 3-year-olds through eighth grade.
Situated on more than 30 acres of land, the setting at St. Stephen is pastoral and serene.
“This parish has a strong sense of history with so many families whose roots go back so far,” said Father Kolson, who noted St. Stephen has about 2,400 registered families.
St. Stephen’s catchphrase for the anniversary is “faith, courage, community.”
Anniversary events included entering a float in the 2012 Kingsville Independence Day parade, concerts and a festival of faith event in April that featured eucharistic adoration and exhibits and lectures about the parish and school history.
St. Stephen’s history includes long-standing partnerships with St. Benedict Parish in Baltimore and St. Steven in Mombasa, Kenya, Father Kolson said. St. Stephen provides outreach ministry to St. Benedict and primarily prayerful support to the African parish.
Chris Deaver, a St. Stephen parishioner and the unofficial parish historian, has spent the past couple of years researching and compiling St. Stephen’s history.
“It’s a passion. I do it as part of our ministry,” said Deaver, whose church involvement also includes the choir and parish council. “My hope is what I leave behind is the documentation for where I got this information so people can continue to research and build on what I’ve done. It’s important to know our history.”
Deaver’s research has been appearing in short essay form in the parish bulletin and there are plans to create a parish history anniversary book, he said.
“So many people do so much for the parish,” said Ray Colombo, chairman of the 150th anniversary committee and a St. Stephen parishioner for nearly four decades. “People are willing to say ‘here I am, Lord.’ We hope all the enthusiasm and excitement that’s been built up will continue.”
“It’s a great boost for the parish to see how far the parish has come,” said Father Kolson, who added the anniversary offers “hope for our future for the next 150 years.”
Copyright (c) June 22, 2013 CatholicReview.org
PrevNext