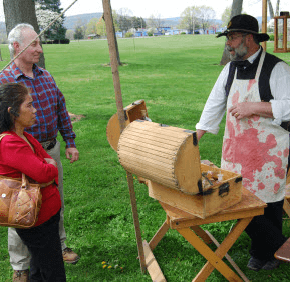 By Catholic Review Staff
As part of the commemoration of Emmitsburg’s occupation by Union troops prior to the Battle of Gettysburg 150 years ago, the Basilica of the National Shrine of St. Elizabeth Ann Seton will host a three-day series of special events June 28-30.
Living historians will be featured, in addition to Civil War-era vendors and crafts, a Civil War tour and a performance by the Williamsport Band and the Metropolitan Detroit Chorale on June 30 at 4 p.m.
Forty years after St. Elizabeth Ann Seton died, her home was the site of a Union encampment and also served as the location for a war council to prepare for the Battle of Gettysburg. Experts will provide real-life accounts of miracles on the battlefields as witnessed by Sisters of Charity and Daughters of Charity who nursed the soldiers during the Civil War.
A “Charity Afire” museum exhibit will display personal accounts, artillery and bullet fragments from the battlefields, and large panoramic images and photos from the war.
June 19, 2013 CatholicReview.org
Visit setonheritage.org for more information.
PrevNext