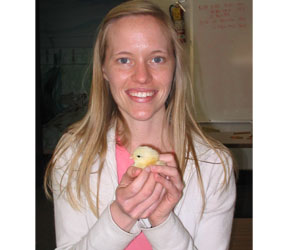 When Kayla Cservek was studying theology at Mount St. Mary’s University in Emmitsburg, some of her friends in the on-campus seminary occasionally teased her about her birthday.

Someone born on Feb. 2 – the feast of the Presentation and the World Day of Consecrated Life – should consider becoming a religious sister, they said.

“I dismissed their ideas,” remembered Cservek, a 25-year-old Baltimore native who grew up at St. Rose of Lima in Brooklyn and graduated from the parish school.

“I’d say, ‘Just because you like to pray doesn’t mean you have to be a sister,’” she recalled.

Despite her protests, Cservek did indeed feel what she described as a “tugging” at her heart to enter religious life. She’s now responding to that call and plans to begin a three-month aspirancy March 25 to become a sister with the Society of Our Lady of the Most Holy Trinity (SOLT) in North Dakota. Cservek will be joined by seven other women from across the country who are discerning the call to religious life as SOLT sisters.

Aspirancy will be followed by a yearlong postulancy in New Mexico before Cservek receives her order’s habit and begins a two-year novitiate. She will then profess her first vows as a SOLT sister.

Cservek’s first inkling that she might have a religious vocation came on Feb. 21, 2001 when she was a 17-year-old girl attending Mount 2000, an annual eucharistic prayer retreat held at Mount St. Mary’s.

“I began to believe and know in my heart that the Eucharist is really and truly Jesus Christ,” said Cservek, who attended Archbishop Spalding High School in Severn for two years before transferring to North County High School in Ferndale.

“My life changed after that,” she said, “knowing that God was real and so close, and that he cared about me.”

Throughout college, Cservek befriended several men and women who went on to become priests and sisters. She was touched by what she calls their “joyful witness.”

After graduating from Mount St. Mary’s, Cservek moved to North Dakota to serve as a camp counselor and religion teacher on the Turtle Mountain Reservation. She later taught public middle and high school students about dating and marriage.

While working with SOLT priests, deacons, brothers, sisters and laity, Cservek witnessed what the religious life was like. She fell in love with the SOLT charism, which is focused on people in different vocations working together as a family and modeling the Holy Trinity.

Cservek knows some can’t understand how anyone could take a vow of chastity. Too many people view the vow in negative terms about what one can’t do or can’t have, she said. She focuses on the positive.

“By taking the vow of chastity, you free yourself to enter into a special relationship with God alone,” she explained. “You belong to him and love him wholeheartedly.”

Cservek believes she has received several signs that she is indeed called to religious life. During adoration of the Blessed Sacrament in 2009, a man poured out his troubles to her. After Cservek looked at the Eucharist, she felt Christ tell her she was meant to draw people to him. That same night, she had a dream involving two bishops. One of them hugged her and told her to remember John 20:21 when things get difficult.

“I woke up with the dream fresh on my mind, quickly grabbed a Bible, and read the passage,” Cservek remembered. It was the passage in which Christ offers peace to his disciples and commissions them with the words, “As the father has sent me, even so I send you.”

Cservek is working with the Laboure Society to raise money to pay off her student loans before entering religious life. To make a donation, e-mail CYLaurent@labouresociety.org and mention Cservek’s name.