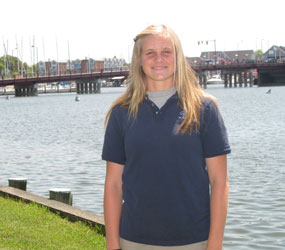 Meghan McCarthy may have her feet firmly planted on the ground, but she really wants to be among the stars.

McCarthy, who graduated from St. Mary’s High School in Annapolis May 26, dreams of becoming an astronaut. She’ll continue that journey this fall at Harvard University in Cambridge, Mass., where she’ll study astronomy.

“My grandfather worked at Goddard Space Flight Center and I’ve always heard how great the whole space program is,” McCarthy said. “It’s all I think about.”

McCarthy went to Space Camp in Huntsville, Ala. Two years ago. Campers performed simulated flight missions, including landing a shuttle.

“There was a lot of energy and pressure, but very interesting,” McCarthy said. “All I could say was ‘Wow.’ It really opened my eyes. I always wanted to be that, but I didn’t realize it was that big and that popular.”

McCarthy, who had a 4.29 grade point average, attended St. Mary’s elementary school, following in her two sisters’ footsteps. She says she’s a member of “the 13-year-club,” a group of more than 30 students who grew up at St. Mary’s and graduated this year.

“I just like that it’s really a community,” McCarthy said. “I think a lot of my teachers have helped me grow spiritually.”

As the youngest in the family, Meghan McCarthy’s graduation marked the end of an era for her family.

“I think they’re looking forward to starting anew, but they’re also sad because we’ve made a lot of friends through this community,” McCarthy said.

She grew up in Kent Island, where she is a parishioner of St. Christopher’s in the Diocese of Wilmington. Still, her family has spent many weekends at St. Mary’s Masses.

McCarthy shined on the lacrosse field at St. Mary’s and she will play the sport for Harvard as well. She’s started playing the sport when she was 9 years old because she wanted to join her friends. The defensive standout soon discovered she was a natural.

“I like that it’s an aggressive sport,” McCarthy said. “I just go out and play.”

McCarthy also played soccer and basketball at St. Mary’s. Once her spring lacrosse season was over, she goes right into summer season. Her motor simply doesn’t stop year-round.

“I’ve really learned since I was young that I have to manage my time,” McCarthy said.

McCarthy said her father Tom, who is an accountant and also runs a restaurant, taught her about working hard. She stayed up late and woke up early to achieve success.

McCarthy was involved in a student leadership organization at the school.

“I’ve learned to use my voice for the better,” McCarthy said, pointing out that she has an interest in politics. She also loves animals, so if her aeronautics career doesn’t work out, she’d like to pursue a veterinary career.

“That’s really a passion,” she said.

McCarthy said that when she found out that she was accepted into Harvard, it was an emotional, joy-filled moment. She looks forward to the academic rigors of one of America’s top institutions.

“Some people who go there are geniuses,” McCarthy said. “They’re really going to help me out because I’m not an actual genius. I just work hard.”

Still, the last few weeks at St. Mary’s were equally emotional. She will miss the campus she has called home for 13 years.

“I’m going to miss the teachers almost as much as the students,” McCarthy said. “It’s going to be hard.”