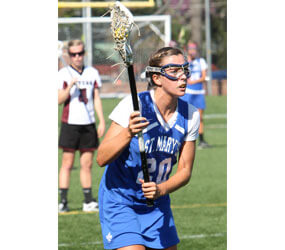 Chelsea Rowe has a motor that won’t quit.

Rowe is one of the two returning starters for the Annapolis school’s girls’ varsity lacrosse team and the midfielder helped the Saints to a 6-1 record by mid-April. She has also starred on the field hockey team during fall seasons.

Meanwhile, she has a 4.1 grade point average and is a member of the National Honor Society.

“It’s actually pretty difficult with managing all that at the same time,” she admitted.

If anyone can make it through such rigors, it’s Rowe, who said she has been fiercely independent since she was a young child. Rowe’s father, Joe, played linebacker for Duke University’s football team. She is the only girl of three children in the family.

“Having two brothers always makes you tougher,” Rowe said. “But, I’ve always been interested in sports. I don’t like to lose. No one does, but I like to win. I love to see the results from working hard in practices and the offseason.”

In the classroom, the St. Mary’s parishioner said she has to push extra hard to attain her GPA.

“I’m not always the smartest person in the classroom, but I’ve always worked hard,” Rowe said. “I want to be the best that I can be. I think I was just born with this driven attitude.”

That determination has paid off, as she will attend Cornell University, an Ivy League school. She’ll play lacrosse there as well.

Growing up in Annapolis, a lacrosse hotbed, Rowe got better each year because of the players she faced on the field and those that were on her teams.

This year’s supposedly inexperienced squad has been no exception. Rowe has matured as a leader on the field and put aside the desire for personal statistics in favor of making everyone else better.

“The team has really been working hard and playing extremely aggressive,” Rowe said. “They’re determined and unselfish. We’re all working together.”