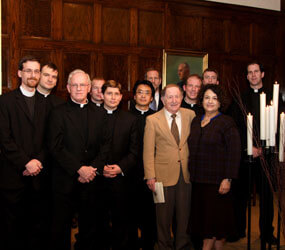 St. Mary’s Seminary and University in Roland Park remembered the victims of the Holocaust, or Shoah, with its 26th annual Yom HaShoah Memorial April 13.

The service included the lighting of six candles of a menorah in memory of Holocaust victims and a seventh candle for the “righteous gentiles” who risked their lives helping Jews.

Fourth-year seminarians organized the memorial as part of their studies in the course “Pastoral Ministry in an Ecumenical and Interfaith Environment,” taught by Sulpician Father Robert F. Leavitt.

According to Father Leavitt, Rubin Sztajer, born in Poland in 1926, gave an eyewitness account of being literally ripped from his mother’s arms to be sent to Markstatd Concentration Camp.

Moved to various camps for three years, Sztajer recounted his experiences of near starvation, forced labor, death marches and mass burials of fellow Jews. On April 15, 1945, Rubin was identified and rescued by his sister in Bergen-Belsen Concentration Camp.

The service included an explanation and recitation of the Kaddish by Rabbi Steven Schwartz, senior rabbi of the Beth El Congregation. It concluded with the music of Shalom Rav sung by Cantor Ellen Schwab.