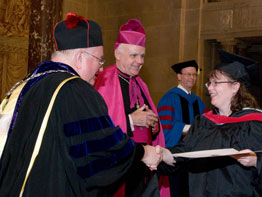 Theologians, pastors, writers and religious leaders can engage in “radical reform” if they promote generosity as a fundamental component of a life of faith.

That was the message delivered by Dr. Martin E. Marty, professor emeritus at the University of Chicago and columnist for “The Christian Century,” during his May 15 commencement address at St. Mary’s Seminary and University in Roland Park.

“I’ve spent my life with young people who dismiss the church because the church curves in on itself,” said Dr. Marty, an ordained Lutheran minister. He suggested that generosity is a way of keeping the church outward looking.

“The generous spirit looks in the face of another,” said Dr. Marty, drawing on Arthur Frank’s “The Renewal of Generosity.”

Noting that generosity isn’t just about giving money, Dr. Marty said it takes many forms. He cited the example of a Nepalese man who offered one of his classmates a place to stay when he was lost in Nepal late at night. The professor also highlighted the “huge act of generosity” involved in offering forgiveness to others.

“Jesus is the embodiment of God’s generosity,” he said. “He was always generous in the company he kept. He broke down barriers.”

Dr. Marty joked that he knows many people who refuse to become involved in the institutional church but describe themselves as “very spiritual.”

The speaker emphasized that generosity is not a stoic virtue.

“We are doing it because it gives God joy – not just for a payoff,” he explained.

Father Thomas R. Hurst, S.S., president-rector of St. Mary’s Seminary and University, conferred an honorary doctor of divinity on Dr. Marty for his half century of work researching religion and culture.

Father Hurst also awarded an honorary doctor of divinity to Michael J. Batza Jr., an active Catholic philanthropist who has aided many projects at St. Mary’s including chairing the committee on buildings and grounds which had oversight of the seminary’s $9 million library expansion. Mr. Batza was also chair of the archdiocesan Heritage of Hope capital campaign that raised more than $142 million.

Recipients of the Ecumenical Institute’s master of arts in theology from the archdiocese include Colleen Marie Koning of St. Timothy in Walkersville, Christopher Moleiro Lopez of St. Joseph in Cockeysville, J.D. McGurn of the Catholic Community of St. Francis Xavier in Hunt Valley, and Mary Kathleen Busch Oshiro of St. Luke in Edgemere.

The master of arts in church ministries was awarded to Deborah Lee Czawlytko of St. Ignatius in Hickory, Ann M. Garvin Johnson of Church of the Resurrection in Ellicott City, Phyllis M. Jicha of Our Lady of Victory in Arbutus, Deacon Hugh H. Mills of Shrine of St. Alphonsus in Baltimore, and Graham Grosset Yearley of St. Vincent de Paul in Baltimore.

In closing comments, Archbishop Edwin F. O’Brien commended the seminary and the graduates. He highlighted the Ecumenical Institute, which is celebrating its 40th anniversary. Quoting from Pope Benedict XVI’s visit to the United States, the archbishop said ecumenical dialogue is about more than mutual understanding. It must also seek the truth, he said.