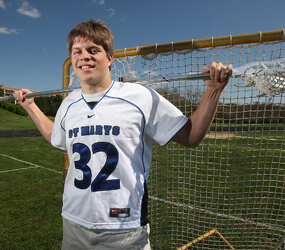 When Jason Gonos was a sophomore at St. Mary’s High School in Annapolis, his class got into a shouting match with the other grades. It was part of a “spirit day” celebration and students tried to outmatch one another in showing pride for their class.

The seniors seemed to have the edge as they loudly bragged about one of their big accomplishments. But Jason’s classmates silenced them when they suddenly countered with a spontaneous chant of their own:

Matt Hogan, varsity lacrosse coach and St. Mary’s assistant principal for students, said the incident captured the essence of how the entire school feels about Jason – a scholar-athlete who was recently awarded an $8,000 scholarship from the Greater Baltimore Chapter of the National Football Foundation.

“Everyone understood what they meant by that chant,” Mr. Hogan said. “It spoke volumes about just how special he is and how much everyone respects him.”

Jason has been a standout on the field throughout his four years at St. Mary’s. The team captain played three years of varsity football as a fullback and linebacker and was voted first-team All-Anne Arundel County, All-Maryland Interscholastic Athletic Association B Conference and second team All-State.

In four years of varsity lacrosse, the 6-foot-one, 200-pound defender made it increasingly difficult for opposing attackers to get near the net. Last year, the team captain was voted second-team All Metro by The Washington Post.

With a 4.3 grade point average that ranks him third in his class, Jason has been just as stellar in the classroom. He plans to play lacrosse and study engineering at Harvard.

Jason said he reaches out to younger teammates because he knows what it’s like just starting out in high school sports.

“It’s easy to get discouraged,” he said. “I try to give them encouragement.”

So far, his advice has paid off as the team was 10-1 before The Catholic Review went to press.

There’s no aspect of lacrosse that Jason doesn’t seem to love.

“It’s so dynamic,” said Jason, who first picked up a stick when he was 6. “It has the hitting of football, the running of soccer and the strategy of basketball.”

The St. Mary’s parishioner watched as his mother Marsha was received into the church at the Easter Vigil. He takes his faith just as seriously as his academics and sports. He prays every day, attends Mass regularly and helps with food drives in the St. Vincent de Paul Society. Jason is also a member of the Fellowship of Christian Athletes.

He looks to his father, Jake, as an example of a good Christian man.

“St. Mary’s really encourages us to have a strong faith,” he said. “Our team is close and we pray before we go on the field.”

Mr. Hogan said Jason will be greatly missed when he graduates this year.

“He’s had tremendous accomplishments, but he’s as humble a person as you’ll ever see,” Mr. Hogan said. “He’s almost too good to be true.”