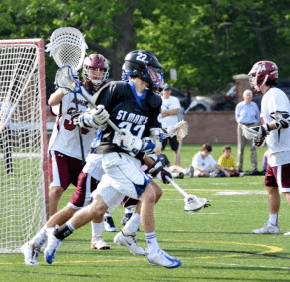 ANNAPOLIS – Eager to emulate his two brothers, Michael Bonacci grew up with a lacrosse stick in his hands. He practiced with a toy stick and helmet when he was 2, and by age 5 he was playing in a youth league.

Now 18, Bonacci stood out as an attackman for St. Mary’s High School in Annapolis, and plans to play lacrosse at Yale University in New Haven, Conn., where he will begin college in the fall.

“I love the physicality of the game, and it’s said that lacrosse is the fastest game on two feet. I’ve been around it my whole life, and haven’t known anything other,” said Bonacci, who plays behind the goal. “A lot of ball movement goes through me. It’s a heavy weight on your shoulders, but it’s a key part of the team.”

Head coach Rob Chomo said he first saw Bonacci play when he was in seventh grade.

“To see how he’s come along as a lacrosse player over the last six years has been pretty impressive,” he said. “He’s turned into a pretty well-rounded lacrosse player.”

The Saints had an up-and-down season, just missing out on a playoff berth in the rugged Maryland Interscholastic Athletic Association A Conference, but Bonacci stayed positive and helped to keep his teammates’ spirits high, Chomo said.

“We support each other in all we do,” Bonacci said. “I’ve never felt that a team that I’m on is as much of a family as this team, and that’s made this season special.”

The attackman also does well off the field. With a 4.1 grade point average, Bonacci has never received a grade lower than an “A” and has taken every honors course his high school offers – well beyond the recommended course load, said Chris Morgan, St. Mary’s assistant principal for academics.

Bonacci is a member of the National Honor Society, National Spanish Honor Society and the school’s Council on Student Affairs. He has a particular aptitude for math and science, and said he plans to study economics at Yale. Balancing sports and academics isn’t easy, he said.

“I’ve had to learn time management,” he said. “Being an athlete here really teaches you how to balance all of your activities in a day.”

Bonacci’s acceptance to Yale culminates his dedication in sports and academics, said his father, Steve, who has helped him study and practice his lacrosse skills over the years.

“It was a very proud moment when a school like that – and a lacrosse team like that – reaches out and asks your son to join them. It’s hard to beat that,” he said.