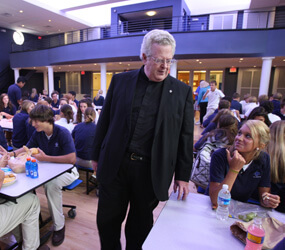 No matter how many times Father John Kingsbury walks into Marian Hall these days, he always finds himself marveling at the St Mary’s of Annapolis structure.

The Redemptorist priest and pastor is not alone.

As Father Kingsbury gave a tour of the renovated parish hall Sept. 10, a representative from the health department walked over to talk.

“This is amazing,” the man said.

Jaws are dropping lately when people see the finished hall, which was originally completed with the parish’s high school in 1947. The room has held many roles in the parish, including cafeteria for both the elementary and high schools, recital hall, gathering space and home for the parish’s family Mass.

The room was transformed into a first-class theater, eating and meeting space over the summer months.

“We had a small window to do all the work while the students were out for the summer,” said Don Jackson, the parish’s facilities director. “We wanted to have things organized, and all the plans and permits finalized, so that the day the students walked out, the contractor could walk right in and get started without any delays.”

Gone are the yellow wall tiles and the low-hanging ceiling that defined Marian Hall. The ceiling has been raised thanks to arched, wooden trusses. Skylight, ceiling windows allow the sun to shine through, illuminating new blue paint on the walls.

At night, moonlight coming through those windows can make the room look like an aquarium.

A mezzanine balcony has been added to the back of the room and can fit about 60 people. A production area is located at the top of the balcony.

Other additions for the nearly $2 million project include: new wall panels have been added for acoustical cleanness, a drop-down wide projector screen, and programmable event light and sound system.

“There’s always $20 million of repairs that need to be done and you’re doing triage,” Father Kingsbury quipped of parish needs. “It took saying this absolutely needed help. It’s the major space of this operation. It has to function or we can’t function. It’s school-related and it’s parish-related.”

Only the front windows of the building remain, a concession made to the local historical society.

St. Mary’s 5,000-plus parishioners got their first opportunity to look at the renovation to Marian Hall Sept. 13 during an open house and picnic.

About 2,500 people donated to the parish’s Renewing the Light Within Us campaign, which started in 2004 and has raised $6.3 million for various renovations.

Jackson oversaw the recent project and calls it “my baby.”

Built by Elkridge-based Hamel Builders, Marian Hall wasn’t the only part of the campus to get an overhaul.

The walkway that connects Marian Hall to the high school’s C. Mason Russell Gymnasium, Blades Hall, has seen the installation of glass trophy cases, a vaulted ceiling with cove lighting and other finishes to walls. The women’s bathroom in Blades Hall also received a few modern touches.

The gymnasium had air conditioning installed, as well as a new fire suppression system, flooring and paint. Also refurbished were the men’s and women’s locker rooms, which have new fixtures and finishes.

The adjoining Kevin E. Reichardt Fitness Center had fixtures installed and a dividing wall was removed.

Part of the school faces Duke of Gloucester Street, a road which sees thousands of cars a day. Prior to this fall, a driveway dipped in front of the school. Now, a handicap accessible ramp and walkway invite people to the campus.

“The changes this campaign has made to this parish are amazing,” said the school’s communications coordinator, Christine Bervid.

Parish and school officials are hoping the remodeling will aid in the recruitment and retention of students. Father Kingsbury estimated the early combined enrollment of the elementary and high schools to be at 1,400 students.

St. Mary’s high school principal, Richard Bayhan, said, “In a time when schools are concerned about their futures, we’re making a strong statement here what our future is by making all these changes.”