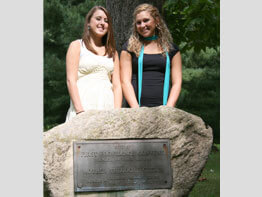 ST. MARY-OF-THE-WOODS, Ind. – For cousins Jena Thralls and Ashley Vermillion, it’s just a short walk from their college dorm room to the site of their family’s special place in American Catholic history.

At night on the campus of St. Mary-of-the-Woods College west of Terre Haute, Ind., Thralls and Vermillion sometimes walk to the rock that memorializes a historic October moment 168 years ago, when St. Mother Theodore Guerin ended a three-month journey from France and arrived in the Indiana wilderness in 1840 with a dream to open an academy for girls.

Standing by that rock, the two college freshmen at times have imagined what it must have been like for Mother Theodore and the five other Sisters of Providence who traveled with her. Even more, the 18-year-old cousins have tried to imagine what it was like for their great-great-great-great-grandparents as they welcomed into their home the woman who in 2006 would become an American saint.

“If I could time-travel, I’d go back to that time,” said Thralls, as Vermillion nodded in agreement.

Both are thrilled to have earned scholarships that let them continue their education at St. Mary-of-the-Woods and continue the story that connects the saint and the Thralls family.

Since they were small children, the cousins have heard their grandfather’s stories about the connection. They know that the religious travelers arrived in the deep western Indiana forest on a rainy night, the end of a journey that included 40-degree days in a boat crossing the Atlantic Ocean and an even longer trip by train, ferry and stagecoach across the American wilderness.

They know Mother Theodore was stunned when she finally reached her isolated destination, a reaction she captured in her journal: “To our utter amazement, there was nothing in sight, not even a house. We went down a deep ravine and up on the other side, and through the trees we could see a farmhouse.”

Thralls and Vermillion also know that the farmhouse belonged to their ancestors, Joseph and Sarah Thralls, the parents of 13 children. The Thralls family welcomed the sisters into their small, primitive home, letting them use half of its rooms. The sisters and the family shared the home until the Diocese of Vincennes, Ind., eventually purchased the Thralls property for the Sisters of Providence.

The connection with the Thralls family is still celebrated by the order.

“We will owe the Thralls family forever for what they did,” said Providence Sister Barbara Doherty, director of the shrine dedicated to St. Mother Theodore on the grounds of the college. “The attachment between the Thralls family and the Sisters of Providence is gigantic. It’s a wonderful thing that (Ashley and Jena) are here.”

The cousins weren’t sure they would be able to attend their “dream” college when they were seniors at West Vigo High School in Terre Haute. They knew they would need scholarships. They sweated through the application process before learning that Vermillion had earned a Top Ten scholarship, and Thralls had received a scholarship named in honor of Mother Theodore.

Thralls’ scholarship cements her bond with Mother Theodore, a bond that began for her and Vermillion when they were 6 and performed in a Bible school play at their parish, St. Mary-of-the-Woods. The play was about the saint and their ancestors.

“It’s comforting to me knowing my family was that close to a saint,” Thralls said. “It’s comforting to know she walked these grounds with my family. I take random walks out there. I try to imagine what it looked like then, what it felt like, what she could see. It’s a blessing.”

Vermillion and Thralls have tried to follow Mother Theodore’s example in sharing their blessings. They are committed to community service, especially helping families in need and children in hospitals.

There’s one other connection that ties the cousins to the saint. In coming to Indiana, St. Mother Theodore made educating others her life’s mission. Vermillion hopes to become an elementary school teacher while Thralls is considering becoming an English teacher.

After 168 years the connection between the saint and the family remains strong.

“It’s really important to me, knowing that our family helped a saint,” she added. “Not many people can say that.”