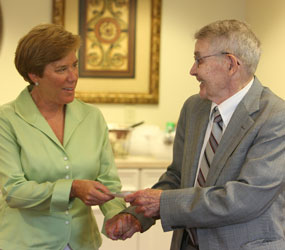 Minutes after he gave away checks totaling $100,000 of his own money, Robert Melville just shrugged.

The money was accumulated through the years by Melville’s late wife Jane, who was devoted to financial planning. Even though she died earlier this decade, Jane’s spirit was part of the check-giving ceremony.

“You were blessed to have Jane as your bride,” said longtime friend Deacon Patrick J. Goles, of St. Margaret, to Melville. “I’m sure Jane would be delighted about what we’re doing here today.”

The couple’s son, Robert Jr., 55, said: “He and Jane had a storybook romance. I’ve never seen anything like that. It was basically love at first sight and they were intensely in love for 52 years.”

Melville approached Deacon Goles about giving the money to groups that were making a difference in the community and caring for those in need.

St. Margaret was one of the recipient’s of Melville’s kindness and the parish’s outreach coordinator, Jane O’Hara, said the money would be split between two organizations. She said $10,000 would go to Catholic Charities’ Anna’s House, which provides transitional and permanent housing for homeless women and their children in Harford County. The other $10,000 will go to a Harford Family Housing.

“Our focus is going to be helping single mothers and families who are in transition, crisis and struggling,” O’Hara said. “They all have children and are trying to make a go of it.”

O’Hara said St. Margaret was humbled by the gift and told Melville, “You won’t ever get to meet the people who are going to benefit from this, but I can’t tell you how many lives you are going to assist and truly save from dear crisis.”

People who know and love Melville say such generosity is reflective of his character.

Melville was a teacher and administrator during his younger years in Baltimore and Harford counties. He also coached cross country at Towson University during the 1950s and 60s.

“He always tried to introduce this concept of ‘every child is a winner,’” said Robert Jr.

His father told recipients that they were cause for celebration.
“When I go to sleep at night, I sleep much better because what has been happening recently,” he said.