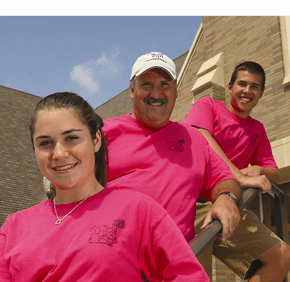 By Catholic Review Staff
The Division of Youth and Young Adult Ministry honored the Archdiocese of Baltimore’s current longest-tenured youth minister with the prestigious Cardinal Shehan Award May 3 at St. Matthew Parish in Northwood.
Pat Sprankle, who has worked at St. Louis for much of his 27 years in ministry, was humbled by the presentation, saying, “youth ministry is never the work of just one person,”
Sprankle said he has been inspired in ministry through the prayer example of Cardinal Lawrence J. Shehan, who was Archbishop of Baltimore from 1961 to 1974.
He joked that he thought he was receiving the award because the archdiocese didn’t know what else to do with him after 27 years. Sprankle, however, has been a major contributor to archdiocesan youths, working with programs such as the High School Leadership Institute to cultivate the next generation of church leaders.
Sprankle said he is “personally challenged to look into the eyes of Jesus,” in all people he meets.
Bob McCarty, the executive director of the National Federation of the Catholic Youth Ministry and a parishioner of St. Francis of Assisi in Fulton, read a litany of comments from friends, youth ministers, priests and young people Sprankle has impacted over the years.
McCarty, who has received the Shehan Award, also praised his friend.
“There are those among us tonight who consider youth ministry a vocation, a calling, a life’s work and a response to Jesus’ challenge to discipleship,” McCarty said. “Pat enters that call to discipleship with energy, integrity and a passion to serve God and others. He is truly a gifted servant leader. “
Patti Murphy Dohn of The John Carroll School and Charles Payne Jr. of St. Agnes Parish in Catonsville were each honored with the Youth and Young Adult Ministry Medal of Honor.
Honored with the For God and Youth Award were: Bruce Ambrose (St. Francis Xavier, Baltimore), Kathleen Broadwater (Mountain Maryland Catholic youths), Ted Burkhardt (St. Michael in Poplar Springs), Michael and Anna Cox (St. Anthony Shrine of Emmitsburg and Our Lady of Mount Carmel in Thurmont), Regina Graham (St. Louis), Tina Kurtz (Visitation Academy in Frederick), Robby Lorenston (Holy Trinity in Glen Burnie) and Cassandra Palmer (St. John the Evangelist in Severna Park).
Copyright (c) May 4, 2012 CatholicReview.org
PrevNext