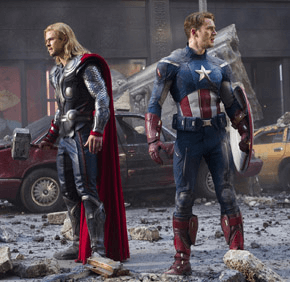 By Adam Shaw
Catholic News Service
NEW YORK (CNS) — Seemingly destined to haul in wads of cash at the box office, the ensemble adventure “Marvel’s The Avengers” (Disney) will not disappoint fans of the comic books on which it’s based. But it may prove problematic for the parents of some excited youngsters anxious to ride the juggernaut.
The film has a long pedigree that can ultimately be traced back to Stan Lee and Jack Kirby’s original comics series from 1963 (Lee serves the screen version as an executive producer).
More recently, it has been foreshadowed with subtle references and clues scattered among the four previously separate superhero franchises that are united here. 2011’s “Captain America; The First Avenger,” for instance, hinted at a future Avengers movie not only in its title but in a post-credits add-on scene as well.
Writer-director Joss Whedon’s script juggles no fewer than six superheroes: Thor (Chris Hemsworth), Iron Man (Robert Downey Jr.), Hulk (Mark Ruffalo), Captain America (Chris Evans), Hawkeye (Jeremy Renner) and Black Widow (Scarlett Johansson).
Led by the eye-patched and grizzled Nick Fury (Samuel L. Jackson), this dream team confronts the mischievous exiled Norse god Loki (Tom Hiddleston). Loki believes freedom is overrated, and has hatched a scheme involving some glowing square that triggers … Well, who really cares what it triggers? Just sit there and eat your popcorn!
Not to be flippant, but the plot is unashamedly perfunctory, and serves only to place our oddly dressed friends in a situation where they can flex their magic muscles.
And flex they do: “The Avengers” shuns attempts at allegory or subtlety, replacing them with special effects, loud noises and a surprisingly witty sense of humor.
Which is not to say Whedon’s plot is entirely shallow. Christian themes concerning the dignity of the person and the value of freedom underlie the hectic proceedings.
Captain America, moreover, is given a bit of dialogue showing him to be a firm believer, not only in Christ but in Jesus’ incarnate nature as both God and man. A firm defense of the uniqueness of Christ’s nature and role is a welcome surprise in a contemporary Hollywood movie, and, however brief, should be enthusiastically applauded.
But there are also more questionable elements on display amid all the mindless action. Though relatively mild, these troublesome ingredients — listed below — will nonetheless raise concerns for some parents, putting them in the uncomfortable position of having to tell the young ‘uns under their care that this otherwise thoroughly enjoyable romp is off-limits.
The film contains intense but largely bloodless violence, a few mature references, including to suicide and drug use, and a handful of crass terms. The Catholic News Service classification is A-III — adults. The Motion Picture Association of America rating is PG-13 — parents strongly cautioned. Some material may be inappropriate for children under 13.
– – –
Shaw is a guest reviewer for Catholic News Service.
– – –
CLASSIFICATION
“Marvel’s The Avengers” (Disney) — Catholic News Service classification, A-III – adults. Motion Picture Association of America rating, PG-13 — parents strongly cautioned.
Copyright (c) 2012 Catholic News Service/U.S. Conference of Catholic Bishops
Read blogger Matt Palmer’s take on how we can be real world Avengers.
PrevNext