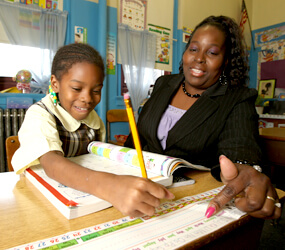 Sharita Walker was visiting the main office of St. Katharine School in Baltimore when the principal, Angela Calamari, pulled her aside to ask a question.

Byron Pitts, a graduate of St. Katharine and a television correspondent for CBS News, was doing a series on literacy and wanted to feature a family from the school. Calamari thought Walker’s daughter, second-grader Aniya, would be perfect for the story.

Aniya was born with a cleft palate that affected her speech and hearing, but she has made remarkable strides at St. Katharine thanks to a strong phonics focus there.

Mother and daughter recently sat down with Aniya’s teacher, Jeniece Linton, to tape an interview with Pitts. CBS’ camera crew shot St. Katharine’s surrounding neighborhood and the exterior of the school, which sits on North Rose Way, just off Biddle Street.

“I was nervous at first, but it was for a good reason,” Walker said.

St. Katharine received its national attention Oct. 4 when the piece was aired during the program, “CBS Sunday Morning.”

“CBS Sunday Morning is a wonderful program, and it’s great exposure for the kids,” Calamari said. “It was a good day, and the interview went really well.”

St. Katharine was showcased for about a minute during the piece, and Pitts talked about how the school was fundamental to his success.

Pitts’ larger piece features the story of a grown man coming to terms with his illiteracy, a standout high school student and St. Katharine.

Pitts himself could not read until he was 12. He credits St. Katharine and Baltimore’s Archbishop Curley High School, with giving him tools for success.

During the interview, Aniya was excited to talk about her developing ability to read.

Asked how rewarding it was to hear that, Walker smiled and said, “It sounds good now.”

Like Pitts, Walker said her daughter is being given tools for success each day by St. Katharine’s dedicated staff.

“I like the family environment and the closeness with the teachers and students,” Walker said. “Everybody knows everybody.”

For parents of St. Katharine students, the school is an oasis. It is part of the Queen of Peace cluster, which includes Ss. James and John School. The school receives support from city parishes like St. Wenceslaus, St. Ann, St. Francis Xavier, St. Vincent de Paul and St. Ignatius.

Most students live within two miles of St. Katharine.

On the morning The Catholic Review visited, two men were sitting handcuffed on a Biddle Street curb a block away and were surrounded by police cars.

The Walkers live off 28th Street and The Alameda, where they experience a tough environment like many St. Katharine families do in their respective communities.

“Our neighborhood isn’t the best,” she said. “There are drugs and gangs. I think that’s the hardest thing right now – keeping them safe.”

Aniya can’t ride her bike as much as she’d like..

“My other two daughters are more aware,” Walker said of what’s around the neighborhood. “It’s really hard because the kids directly around us are affected by it – the drugs. It’s hard to keep that from brushing off.”

Calamari said the majority of her students are non-Catholic Christian. The families struggle to send their children there and are typically asked to pay $175 a month. Partners in Excellence and local parish support also help defray costs.

Calamari said every principal wants to say their school is the best, but she knows people at St. Katharine are living out a mission one student at a time.

“The city schools are so important to their areas,” Calamari said. “What we can offer them is Jesus and faith, hope and love, which is something the public schools can’t offer them.”