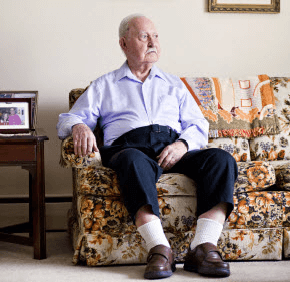 ODENTON – As a boy, Joe Mastrucci remembers wanting a sled for Christmas – a wooden flexible flyer on thin metal runners, with a hinged crossarm for steering. Steering was important – Mastrucci once sideswiped a hillside tree while sledding at the orphanage where he once lived with his six siblings.

He got a sled, but it did not steer. That was OK, Mastrucci said nine decades later. With soft ground and long grass, the fields at his aunt and uncle’s farm did not make for good sledding like the packed snow on the children’s home hill.

This year, Mastrucci will celebrate his 101st Christmas, as he became a centenarian Nov. 7. He will spend the holiday as he has for more than a decade, with his son’s family in Miami. His wife died in December 2000, and the holiday season is tinged with the memory of her death, said Mastrucci, a parishioner at St. Joseph, Odenton.

A retired Army lieutenant colonel, Mastrucci was born before World War I, and served during World War II, and the Korea and Vietnam Wars. He was educated in a one-room schoolhouse, and was the first in his family to earn a college degree.

Mastrucci was born near Kane, Pa., nearly 100 miles southeast of Erie, where his father worked at a wire glass factory. When he was about 6, his mother grew ill – perhaps from the 1918 Spanish flu pandemic, he thinks – and she was unable to care for her children. They went to live at a children’s home in a nearby town. After their mother died in 1921, the siblings were adopted or hired by other families.

An aunt and uncle took Mastrucci in, and later a brother joined him on their farm. He eventually went to live with his father, who moved every few years for work.

In 1930, he entered the University of Pittsburgh on scholarship to study engineering, and later worked as a metal inspector for an oil refinery in Toledo, Ohio, before being called to active duty military service in 1940. During World War II, Mastrucci spent 46 months in the Pacific. When he came home, he was assigned to Fort Bliss, Texas, where he brought his bride, Germaine Miller – whom everyone called “Gerrie” – after their 1947 wedding in Toledo.

The Mastruccis had two children and moved every few years for military assignments in the U.S. and abroad. He and his family lived in Panama and Taiwan, Florida and Washington State.

Now living in Courtland, N.Y., Joe’s daughter, Terry Mastrucci, said she had a “marvelous” childhood traveling and growing up in different cultures.

“My parents had a wonderful marriage, and they always gave us this great feeling of security that home was wherever they were and we were, and as long as we were all together, life was great, so we could go have adventures,” she said.

Mastrucci was assigned to Fort Meade before he retired from the military in 1966. The family stayed in Odenton, and Mastrucci worked for Maryland’s Department of Health and Mental Hygiene. He has been a parishioner at St. Joseph for nearly half his life, and in November, the parish threw him a birthday party after Mass.

Being 100 feels no differently than 98 or 99, said Mastrucci, who is a member of the Knights of Columbus and among the estimated 72,000 U.S. centenarians.

His advice for longevity? “Everybody asks me that,” he said. “I tell them moderation.”

He never smoked and drinks alcohol infrequently. He exercises three times a week at an Odenton senior center.

His daughter agrees that moderation in food and exercise has played a role, but she attributes his age to enjoying life and living in the present, taking life day by day. She tries to follow his lead, she said.

“(It’s) taking life one day at a time, trying to see things in perspective, just trusting that things will work out in the end,” she said.