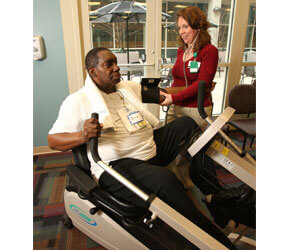 After medication did not have the desired effect on his high blood pressure, the 50-something sibling nearest my age underwent a cardiac catheterization last May.

Given a family history of heart disease, I set out to lower my cholesterol level from 230, borderline high. By mid-December, it had risen to 244, into the high range, with a concurrent rise in my LDL, bad cholesterol.

That blood work was done before a Christmas Eve feast of lobster in drawn butter, fresh-cut french fries, oyster stew and pecan pie, with a few Sam Adams Celebration Ales added to my proverbial heart attack waiting to happen.

Thus it was that I took a keen interest to The Heart Institute at St. Joseph Medical Center, to interview Sheila J. Druck, a cardiac nurse educator, and Asa House, a registered dietician.

In recognition of February being American Heart Month, what’s their advice on how best to avoid being prescribed a visit to them in Outpatient Cardiac Rehabilitation?

In essence, anyone interested in improving their cardio fitness should exercise more, limit foods laden with trans fat, saturated fat – back off the bacon and eggs – and include more plant-based meals.

Born in Sweden, House shook her head at the memory of her first trip through a grocery store in America, the land of sugary drinks and sodium-laden processed snacks.

“Shop around the perimeter of the store,” House said. “Instead of walking the aisles, where you pick up the chips and soda, stay in the produce section, with the fruit and vegetables. The general American diet gets about 12 grams of fiber per day. The recommendation for lowering cholesterol is about 30.”

“Remember grandma, with the cod liver oil?” House said. “She was right, it raises good cholesterol.”

House suggests new routines that include more time, not less, in the kitchen.

“In preparing meals, start from scratch and know what you’re buying,” she said. “We rely on processed foods, but a lot of nutrients go out with the processing.”

After a heart attack, open-heart surgery or other cardiac event, a St. Joseph team that includes House, Druck and trainers certified by the American College of Sports Medicine prescribe a rehab regimen, tailored to an individual assessment.

“We want to know their medical history, know them as a whole person,” Druck said. “What are their risk factors, and which ones are modifiable? If they smoke, we’re going to encourage them to quit. If they have cholesterol, we’re going to consider diet changes. Exercise is a component that affects all the others.”

In the cardiovascular fitness area, Druck and fellow staffers put more than 70 participants a week through their paces on a variety of bikes, treadmills and free weights. It’s like a neighborhood gym, except under the supervision of a nurse.

“The exercise is medically supervised,” Druck said, “in that they’re wearing a heart telemetry monitor. We’re watching their heart rate and rhythm, and checking their blood pressure.”

The axiom of train, don’t strain, certainly applies at St. Joseph, where most participants work out 60 to 90 minutes, three times a week. Nearly all are encouraged to get 30 minutes of exercise on other days.

“We get athletes who are used to doing a lot, but have lost their confidence,” Druck said. “We have participants in their early 90s. Whatever their individual assessment, our goal is to keep them informed and motivate them to go where they want to go.”

Pardon me while I take a walk … to a produce market.