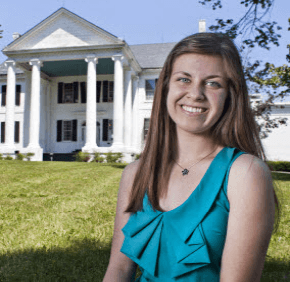 A nutrition course was the only elective class Emily Tolino could fit into her busy schedule her junior year at St. John’s Catholic Prep in Frederick.

So she took it, and found she loved it.

The class compelled her to change her diet, cutting processed foods and adding more fruits, vegetables and fish. It also prompted her decision to pursue a career as a registered dietitian. Tolino, 18, will begin working toward a degree in dietetics at the University of Maryland College Park in the fall.

“Nutrition is something we encounter every time we eat, but we never really think about it, so when you learn really what’s going on, it’s really fascinating,” said Tolino, the daughter of Vince and Kathy Tolino and a parishioner of St. Joseph on Carrollton Manor, Buckeystown.

During high school, Tolino managed a full plate of another kind. She participated in the National Honor Society, and was a student government officer, mock trial team defense attorney, student ambassador and peer minister. She also acted in school plays and was a setter on the volleyball team. A member of Vikings for Hope, she raised money for children with cancer.

Outside of school, she was a competitive Irish dancer and volunteered at her parish and Frederick Memorial Hospital, where she once shadowed a registered dietitian to learn more about the profession.

Experience and time taught Tolino how to balance multiple extracurricular activities and academics, she said.

Tolino graduated May 25 with 77 classmates. With a GPA of 4.13, Tolino ranks in the top 10 percent of her graduating class, she said, and made the school’s President’s List, denoting straight-As every semester of high school. The school also named her a “Core Scholar” four times for achieving the highest grade in a particular course.

She described her high school years as an “adventure.”

“I feel like St. John’s has helped me move along these past four years,” she said. She valued being part of a community of people whom she feels will always “have her back,” she added.

When looking to college, Tolino wanted “to see the bigger side of academics,” she said. She was drawn to the University of Maryland, College Park because of the dietetics program’s good reputation and its robust school spirit. She was accepted into an honors program that includes small class sizes.

The dietetics field is vast, and Tolino is unsure of what direction she’ll take. She is interested in nutritional counseling and therapy, and envisions herself working one-on-one to address people’s nutrition problems. She also imagines taking her knowledge to developing countries.

Either way, she wants to help her community.

“I want to make (others) healthy and happy,” she said.