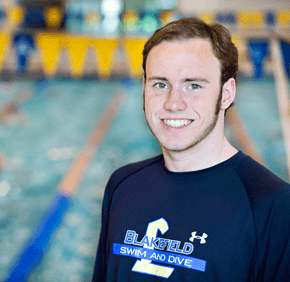 TOWSON – Kendrick McDonald is the epitome of a well-rounded student.

McDonald, 18, was on Loyola Blakefield’s water polo and swim teams, one of the top 10 students in his class of 183 and a student leader.

McDonald, who graduated June 3 from the Towson school with a 4.33 GPA, will attend Yale University in New Haven, Conn., in August.

“I was just really happy because over my years here, English has become more important to me,” McDonald said of the award. “English (and writing) is something I really enjoy, a skill I’d like to continue to develop.”

He is considering majoring in English, but does not have a specific career path in mind. He hopes to get involved with Yale’s student newspaper.

Exploring a possible career field in medicine, in 2010 McDonald volunteered at Greater Baltimore Medical Center in Towson, where he did administrative work and shadowed oncologists.

“Physics is kind of an interest of mine,” said McDonald, a Columbia resident. “It was neat to see how it was applied in the real world.”

In April, McDonald was a student leader for the school’s Kairos retreat. The retreat, held in Buckeystown, is an opportunity for students to get closer to their peers with a “spiritual and personal dimension,” said McDonald, who called the retreat “a very enriching experience.”

McDonald also participated in the school’s peer education program his sophomore, junior and senior years. Loyola’s high school students mentor younger students about “issues we think are important,” such as how to prepare for high school.

Peer educators are a “support system,” said McDonald, an example of the school motto, “men for others”

“We try to give kids advice, what works well, things to think about,” McDonald said. “We’re trying to help the guys at Blakefield make good decisions.”

A swimmer since age 6, McDonald swam on Loyola’s varsity for four years and was on varsity water polo for three years. He was co-captain of the swim team as a senior, and is committed to swim for Yale.

At the Maryland Interscholastic Athletic Association championships in February, McDonald won the 100-yard breaststroke and 200 individual medley. He earned recognition as both an All-American swimmer and a USA swimming academic all-American.

With McDonald’s club team also practicing at the school, Keith Schertle, the Dons’ swim and water polo coach and a physical education teacher, said he logged 15 to 18 hours a week practicing at the Loyola Blakefield pool.

“He has a whole lot of talent,” Schertle said. “He did work extremely hard both in the pool and the classroom to go to Yale.”