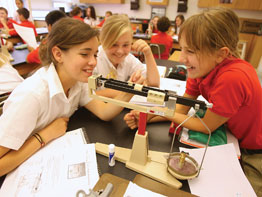 Sister Linda Larsen, S.S.J., sat in her office Sept. 8 and felt like dancing.

The principal of St. John the Evangelist School in Severna Park received an afternoon e-mail informing her that the school had been named a No Child Left Behind-Blue Ribbon School by the U.S. Department of Education.

St. John the Evangelist is the first school from the Archdiocese of Baltimore in a decade to claim Blue Ribbon status, and is one of just 50 non-public schools across the country named this year. Two-hundred and seventy public schools were honored.

“We at the Council for American Private Education join you in celebrating your school’s success,” Joe McTighe, CAPE executive director, wrote in the e-mail. “You, your staff, students and parents should be proud and pleased that your efforts to deliver the highest quality education are not only successful, but are an example to others.”

CAPE nominated St. John the Evangelist for the honor in recent months.

After reading the news, Sister Linda, who has been with the school 20 years, rose and did her dance of joy. She then turned her pride toward faculty members and students, who were in classrooms, waiting for the final announcements and prayers.

The afternoon’s quiet was disrupted, with approval.

“There was whistling and everything,” eighth-grader Collin Brown said. “It was exciting to hear all the classes cheering.”

Many students at the Pre-K through eighth grade school did not grasp the magnitude of the award.

“I know that our school has done well,” eighth-grader Claire O’Friel said. “We had heard that it was a prestigious honor.”

Sister Linda couldn’t hear the applause, but felt the energy of the St. John parish and school community.

“It’s been a very good week for us,” said Monsignor Richard W. Woy, the pastor of St. John.

The school will receive its official next month, in Washington, D.C. Archbishop Edwin F. O’Brien made a congratulatory call to Sister Linda. In January, he will celebrate Mass at the parish and attend a gala for the school.

“It will be a celebration of those special people – the parents – who help make this school what it is,” said Tom Farcosky, school board vice president.

The Blue Ribbon effort began last year, after St. John completed an evaluation by the Middle States Association of Colleges and Schools. After being wowed by the school’s daily math, language arts, social studies and religion classes, as well as its unique learning differences program, evaluators suggested that Sister Linda pursue the Blue Ribbon distinction.

CAPE saw no need to enhance the application. While many in the school began to feel a Blue Ribbon designation was imminent, Sister Linda kept everyone humble.

“I would not let myself get excited until I knew it was real,” she said.

“I’m not sure people knew how good our product was,” Sister Linda said. “With this national recognition, perhaps people will understand we have a lot to offer the children of our parish and the wider community.”

The Blue Ribbon honor came as no surprise to teachers Bridgett Lacey, Helen Bradbury and Tina Lewnes, all of whom graduated from St. John.

“I always felt like we were a very good school,” Mrs. Lacey, the head of the school’s learning differences program, said.

Monsignor Woy added that St. John placed all but one of last year’s 59 graduates in their preferred high school.

“We’re second to none,” he said. “The thing we have to offer that others don’t is a Catholic education. We profoundly value the Catholic identity of our school.”