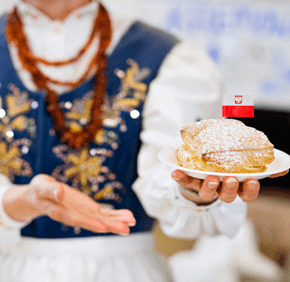 By Maria Wiering
mwiering@CatholicReview.org
There’s a story about St. John Paul II that describes a love from his childhood, when he was simply Karol Wojtyla.
That love was cream cake.
It’s well-known in his native Poland that the future pontiff and saint had an affection for the cream-filled pastry. Now Baltimoreans are getting their own taste, thanks to parishioners of Holy Rosary in Fells Point.
The traditionally Polish parish sold the cream cake, made with a secret recipe, along with pirogues on April 26 and 27 to commemorate the April 27 canonizations of Pope John Paul II and Pope John XXIII in Vatican City.
The cake, which is also described as a “cream pie,” is called “kremówka.” Its name popularly expanded to “kremówka papieska” – or papal cake – when the pope’s love for the pastry became known. It is commonly made with two layers of French pastry separated by a layer of custard, dusted with powered sugar and cut in a square for serving. It is similar to a napoleon.
According to Catholic News Service, St. John Paul II was speaking before a crowd of 10,000 in his hometown of Wadowice in 1999, when he reminisced about a bakery in the town square that sold the pastry. He described cream cakes with classmates after completing their high school exit exam.
“Somehow we survived all those cream cakes,” he said, as the audience cheered.
Some accounts describe the young Wojtyla and friends challenging each other to a cream cake eating contest. The future pope reportedly ate 10 (or more), but lost.
Alina Cymek, 44, was among 13 parishioners who learned to make the cream cake from a Polish religious sister who visited the parish in early April. Sister Malgorzata Tomalka, a Missionary of Christ, gave a tutorial on the pastry and the cream filling in the kitchen of Cristo Rey Jesuit High School, adjacent to the church.
The finished product was exceptional, Cymek said.
“It was like heaven in our mouth,” she said. “It was so delicious.”
Born in Poland, Cymek immigrated to the United States at age 21. She said she always felt a kinship with Pope John Paul II because they shared a home country, but he became a special intercessor for her after his death. She attributes her brother’s unexplained disappearance of a lump on his lung to the pope who is now a saint.
Cymek called the cream cake something that goes from “your taste(buds) to your heart” in celebration of the much beloved pontiff.
In addition to selling Polish food, Holy Rosary hosted a special afternoon liturgy April 27 to mark the canonizations.
Interested in the recipe? This website offers instructions on how to make the pastry.
Also see:
Tiramisu’s creator focuses on customer happiness
Archbishop Lori praises pilgrims for braving the crowds for canonizations
Archivist: John Paul II display offers ‘chance to relive’ new saint’s Baltimore visit
Pilgrims follow saints’ examples to Rome
Our Lady of the Mountains parishioner feels at home in Italy, with religious men and women
The canonizations of two popes, by the numbers
Pope John Paul II’s visit to Baltimore touched many lives
Blog: A look back at Blessed John Paul II’s 1995 visit to Baltimore
PrevNext