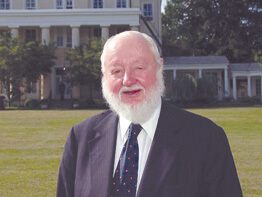 When Charles B. Reeves Jr., 84, was a child, his father would take him and his brother to Kernan Hospital, Baltimore, as he “made rounds” on Sundays. Charles Reeves Sr. became president of the Kernan board of directors in 1936, serving for 19 years. In 1959, the junior Mr. Reeves joined the board to take over where his father left off.

On June 6, a reception at the hospital honored the junior Mr. Reeves’ devotion and generous donation of $1 million to the hospital’s endowment fund. The retired Baltimore lawyer and St. Ignatius, Baltimore, parishioner served as chairman of the hospital’s board of directors and as the president of the endowment fund for nearly 50 years.

“My father and I have been associated with this hospital for so many years,” said Mr. Reeves, whose father died in 1957. “It has been a labor of love for both of us.”

Mr. Reeves Jr. had a hand in the hospital being acquired by the University of Maryland Medical System in 1986 and its merger with Montebello Rehabilitation Center in 1996. He helped to create the James Lawrence Kernan Hospital Endowment Fund, Inc. in 1974 and served as its president from 1986 until 2007.

“Charles Reeves’ unflagging support and guidance have helped to make Kernan Hospital the premier orthopaedics and rehabilitation facility that it is today,” said James Ross, chief executive officer of Kernan Hospital. “He has served this hospital for nearly 50 years and now has presented us with this magnificent gift. We can’t thank him enough for all his support.”

According to Davis V.R. Sherman, chairman of Kernan’s board of directors and president of the endowment fund, Mr. Reeves truly “exemplifies the Baltimore business leader taking care of Baltimore organizations.” Mr. Sherman said Mr. Reeves is a good judge of character and is a very loyal friend to those people in the organization, his church and the schools he attended.

“Under his leadership, the endowment fund has been able to support Kernan Hospital through thick and thin,” said Mr. Sherman. “At the same time, he was able to build the endowment principal to more than $30 million by insisting on a bold investment strategy.”

Mr. Reeves’ family members have been parishioners of St. Ignatius for more than 100 year and Mr. Reeves has been active in his parish for many years. In 1972, when Mr. Reeves was president of the parish council, the church was considering closing its doors forever but he “led the charge” to keep the parish running.

“You get satisfaction from it,” Mr. Reeves said in regards to why he has given so much time and energy to Kernan Hospital and St. Ignatius. “You don’t want to just live for yourself.”