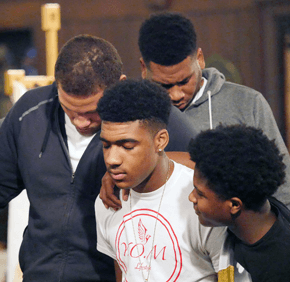 In the wake of a level of unrest the city hasn’t seen since 1968, and with the heavily armed National Guard among those patrolling Baltimore’s streets, Gordon Outlaw made no requests of God as he opened the final day of St. Bernardine’s revival.

Instead, he thanked him.

“Thank you,” he said, “that you walk with us every day, and you’re with us in every moment,” Outlaw said April 29.

“Many of us zigged and zagged and U-turned through the streets of Baltimore, because of the out-there madness, to get here tonight,” noted Everett Garnett, master of ceremony.

He then directed the audience to acknowledge each other, and 10 minutes of hugs followed while the St. Bernardine choir sang, “The Jesus in me loves the Jesus in you.”

Monsignor Richard J. Bozzelli, pastor of St. Bernardine, said that the turbulence in Baltimore made the revival all the more relevant and necessary.

“God works how he works,” he said. “We are witnesses to truth, and we don’t know where the wind blows and where it will take us.”

April 27, the first night of the revival, about 100 people arrived to sing and pray at the height of the looting and conflict that occurred in the city. Deacon B. Curtis Turner, principal of St. Frances Academy, preached about the storm at sea that panicked the disciples, until they saw Jesus walking on the water.

April 28, the first full day of the National Guard’s presence, residents uneasily hoped for peace. Despite the uncertainty, the students of St. Frances, an co-ed high school, insisted on moving forward with “youth night” for the second evening of the revival.

“We’re trying to put as much word out as we can that this is a place for positive youths to come and pray,” Deacon Turner had said.

April 29 again brought a large group of young men from St. Frances, as well as close to 100 parishioners.

The featured preacher, Elder Danaz Williams, assistant director of the Father Joubert Program and an elder and youth leader at Jesus Is Real Kingdom Outreach Worship Center, encouraged the audience to get their hands dirty.

“Sometimes you’ve got to get dirty and entangled for the Lord,” Elder Williams preached.

He said that he “came to tell the truth, the whole truth, and nothing but the truth.”

“They can say that in the courthouse – when they’re grabbing my young brothers – so how come we can’t say that from the street corners of Baltimore?” he said.

“We need true change,” he added.

Choir member Laura Keene said that she had attended all three evenings of the revival “to get pumped up for God.”

She commented on the death of Freddie Gray and the unrest in Baltimore.

“It’s a serious problem, and we need God to help us get it straight,” she said. “We need to do all the praising and worshiping we can.”

It’s a common sentiment in the Archdiocese of Baltimore at the moment. On May 3, at 10:45 a.m., Archbishop William E. Lori will celebrate a special Mass for peace in the city at St. Peter Claver, located at 1546 N. Fremont Ave.