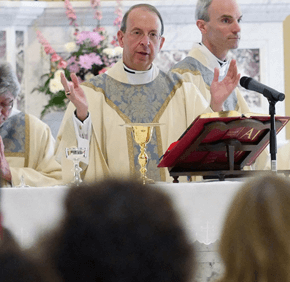 On a day when more protests were planned in response to the death of Freddie Gray Jr. in police custody, Archbishop William E. Lori celebrated the midday Mass at the Baltimore Basilica to pray for peace.

In his homily April 29 at the Basilica of the National Shrine of the Assumption of the Blessed Virgin Mary, the archbishop reflected on the Scripture reading for the day. “In the Gospel, we read how after the Resurrection, Jesus appeared before his disciples and showed them his wounds – the wounds in his hands, his feet and his side.”

He noted, “The wounds inflicted on Christ on Calvary became the source of healing in the risen Lord as conqueror of sin and death. By his wounds we are healed.”

He said that in the days after unrest in Baltimore, people of faith gathered to show Jesus our wounds, including the wounds of excessiveness. “Those wounds have been very visible these past days in our City of Baltimore which, along with peaceful protests, has erupted in violence in the wake of Freddie Gray’s death. These are not new wounds, but old ones,” Archbishop Lori said.

He said the wounds of unemployment, poor housing, drugs and lack of family structure are the roots of living without hope, and that the violence that has beset our city is not the answer.

“Healing comes through prayer, dialogue and building bridges,” and when we allow the Lord to guide us to be instruments of peace and justice, he said.

“We pray today that we might be healers, peacemakers and bridge builders.”