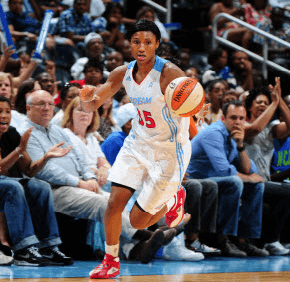 McCoughtry, a 2004 graduate of St. Frances Academy in Baltimore and the leading scorer in the Women’s National Basketball Association, is on the 2012 U.S. Olympic women’s team.

“It’s just an honor,” said McCoughtry, 25. “It hasn’t really hit me yet. When I get to London and the opening ceremonies, I think everything will start flashing back.”

After St. Frances Academy, McCoughtry was a three-time All-American for the University of Louisville, where she earned an undergraduate degree. She was the No. 1 selection in the 2009 WNBA draft and then the league’s Rookie of the Year for the Atlanta Dream.

McCoughtry said she “dreamed of being in the WNBA,” and being an Olympian is “a dream come true.”

McCoughtry will head to London July 18. The Summer Olympics begin July 27, and the medal round games in women’s basketball will be Aug. 11, the day before the Games close.

The U.S. women are heavy favorites to defend, as they went 8-0 at the 2008 Summer Olympics in Beijing and are the reigning world champions.

She won’t be as visible on NBC as Michael Phelps – who will? – but McCoughtry is a major part of the U.S. team. She was the second-leading scorer and the fourth-leading rebounder for the Americans at the 2010 world championships, and their high scorer in the gold medal rout of the Czech Republic, the tournament host.

McCoughtry is one of five WNBA players nominated for an “ESPY,” presented by the cable sports network ESPN, for best WNBA player. The winner was expected to be announced July 11 in Los Angeles, after the Catholic Review went to press.

Through games of July 9, McCoughtry was averaging 22.6 points per game, tops in the WNBA.

The U.S. men’s Olympic team, meanwhile, will again include Carmelo Anthony, who starred for the now-closed Towson Catholic High School in 2000-2001 before moving on to a prep school in Virginia and then leading Syracuse University to the 2003 NCAA title. Anthony plays for the New York Knicks.

Oblate Sister of Providence John Francis Schilling, president of St. Frances Academy, said that while the school has produced other professional athletes, McCoughtry is the school’s first Olympian.

A basketball player since age 8, McCoughtry played on the Panthers’ basketball team throughout high school. She was also on the school’s track and field and volleyball teams.

Sister John Francis called McCoughtry “a phenomenal athlete” and an “outstanding track star,” but said “basketball was No. 1. She did the other things for conditioning.”

As a freshman at St. Frances, “you could tell the talent, but she (McCoughtry) wasn’t a centerpiece,” said Sister John Francis, a fixture at school sporting events. “I don’t think she recognized her talent; I don’t think other people did either.”

An average student, McCoughtry “was just a regular kid,” Sister John Francis said. “She was definitely very much involved in everything we do. I think we have really good athletes. They can come here and be regular students.”

A non-Catholic, McCoughtry said she was accepted at St. Frances “for who I was.”

“It was a blessing from God,” McCoughtry said of her time St. Frances. “I enjoyed my four years there.”

“The students, especially the girls, have a real interest in Angel,” Sister John Francis said.

The 6-foot-1-inch guard-forward, who has an endorsement contract with Nike, founded the Angel McCoughtry Dream Foundation, a Georgia-based, nonprofit that works to teach and empower youths to follow their dreams with self-confidence and life skills.

Another motivation for starting the foundation in 2011 was her desire to get girls physically active to lower obesity rates.

“I’m really passionate about girls and sports,” McCoughtry said. “Girls who are busy and active, they’re more focused, they’re going after a goal.”