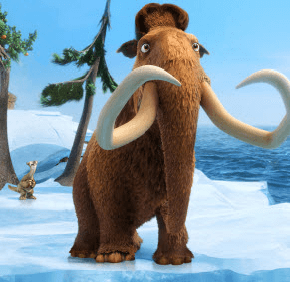 NEW YORK – As he has been known to do before, the manic saber-toothed squirrel Scrat (voice of Chris Wedge) steals the show in “Ice Age: Continental Drift” (Fox).

Other comic elements in this modestly entertaining 3-D animated sequel, co-directed by Steve Martino and Michael Thurmeier, are beginning to feel worn. But lessons in loyal friendship and family solidarity are more durable. And the only red flags for parents are raised by plot developments that might frighten the most sensitive and some fleeting potty humor.

This forced family breakup comes at a bad time: Overprotective Manny and headstrong Peaches have been quarreling over her aspirations to hang out with the local in-crowd led by mammoth heartthrob Ethan (voice of rapper Drake), whom she’s trying to woo.

Peaches’ membership in Ethan’s clique also spells trouble for her long-standing friendship with mole hog Louis (voiced by Josh Gad) since her snobbish new pals regard him as insufficiently cool.

Determined to reunite his clan, Manny is aided by his two closest amigos, sloth Sid (voice of John Leguizamo) and tiger Diego (voice of Denis Leary). But his efforts are temporarily stymied when the trio is taken prisoner by a band of pirates led by bellicose orangutan Captain Gutt (voice of Peter Dinklage).

Accompanying them into captivity is Sid’s eccentric Granny (voiced by Wanda Sykes), whose other relatives have dumped her in Sid’s keeping – much as they previously abandoned Sid himself. Happily for her companions, though, Granny is not quite as dotty as she first seems.

The shortcomings of this pleasant but uninspired fourth installment of the popular franchise are only emphasized by its being shown in conjunction with “The Longest Daycare,” a brilliant short featuring characters from television’s long-running comedy, “The Simpsons.”

Looking at the upside, though, the single sight gag of Marge Simpson dropping her little daughter Maggie off at the Ayn Rand School for Tots is probably worth the whole price of admission.

The film contains mild menace and a bit of scatological humor. The Catholic News Service classification is A-I – general patronage. The Motion Picture Association of America rating is PG – parental guidance suggested. Some material may not be suitable for children.