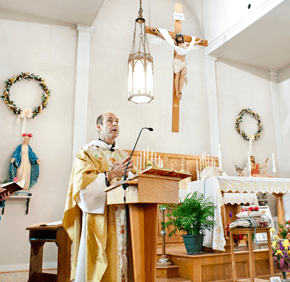 The priest of 24 years will join others on a 100-mile pilgrimage from Western Maryland to Baltimore’s historic Basilica of the National Shrine of the Assumption of the Blessed Virgin Mary, July 29 to Aug. 5.

“This is a pilgrimage for religious freedom, to witness to others along the pilgrim route, that Catholics and other institutions are mandated against their religion and conscience to offer unjust health care packages,” according to a written announcement about the pilgrimage.

Father Lombardi, 51, said he came up with the idea to organize a pilgrimage last week (July 2-6), and already his parish is lining up volunteers, contacting parishes along the way to secure lodging, organizing a communications committee and more. Father Lombardi, who participated in El Camino de Santiago (The Way of St. James) three years ago in Spain with 15 others, said St. James will serve as an inspiration to pilgrims.

“I thought number one, we should do more as Catholics,” Father Lombardi said of his reason for launching the pilgrimage. “Number two, it’s summer so people have some vacation and free time available, and three, why not combine some of that for our faith in doing a pilgrimage to a religious place?”

He said he hopes the pilgrimage, which will begin at noon on July 29 at St. Peter, will raise $5,000 to $10,000 for charity and attract people to the cause of religious liberty.

Donations raised will be evenly disbursed to St. Vincent de Paul of Baltimore, which provides community services to people suffering from the effects of hunger, homelessness and poverty, and to the Interfaith Service Coalition, which is a cooperative effort of the churches of the greater Hancock area to provide community outreach and support in times of need or emergency.

On the first leg of their journey, participants will trek 13 miles on the C&O Canal path along the Potomac River. The second day they will head from Fort Frederick State Park to Hagerstown. From there, they will head to South Mountain State Park, Middletown, Frederick, Poplar Springs, Ellicott City and Baltimore.

Father Lombardi says he hopes to involve as many youth as possible as well as those who have physical agility, as pilgrims will hike an average of 13 miles each day.

“One of our mottos is planning and providence,” Father Lombardi said. “We try to plan as much as we can, but we also want to rely on God’s providence, like many pilgrims do, so that he will provide for us along the way. A pilgrimage is a good exercise in balancing those two P’s – in surrendering to people for charity, meeting people on the way and witnessing to others. Those unplanned parts are part of the adventure.”