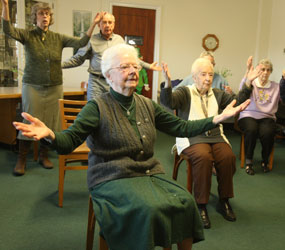 Sitting on a chair facing a DVD player’s TV screen Angeles Phillips let the gentle sounds of a traditional Gaelic blessing wash over her as she raised her arms, moving them forward and back, up and down, her hands first facing away from her and then toward her in a manner rather like “signing” for the deaf.

Seated around the 84-year-old parishioner of St. Dominic, Hamilton, were 10 other elderly women and men engaged in the same exercise, directed by School Sister of Notre Dame Marie Seton, the parish special events minister. Like Phillips, they all appeared to be in a peaceful trance-like state.

It is a scene repeated each Friday at St. Dominic after the 8:30 a.m. Mass as part of an increasingly popular, innovative relaxation system called Sign Chi Do, developed by an Arizona physician and Catholic, Dr. Anne Borik, whose DVDs incorporate Christian prayer and meditation with gentle exercise.

“This is not something like Tai Chi or Yoga, it is very Christian, faith affirming and faith strengthening,” explained Sister Marie, noting that Borik’s series of inspirational DVD exercise instructions are produced around specific Christian themes, such as the beatitudes and certain psalms.

The Irish Blessing theme was chosen for this day because it was close to the feast of St. Patrick, she said.

The 45-minute DVD sessions incorporate breathing, movement, prayer intention and music with sign gestures that provide a comprehensive mind-body stimulation in a way that their physician producer says cannot be duplicated by other fitness programs, Sister Marie explained.

It is not intended, however, to be used in the deaf community as a means of communication, rather it uses sign gestures “to help get to the deeper meaning of the words of prayer,” Sister Marie said.

Phillips and her fellow St. Dominic parishioner, 85-year-old Rusty Nuth, have been practicing Sign Chi Do at the church’s parish center for the past two years as part of the community outreach programs developed by Good Samaritan Hospital and facilitated by the hospital’s parish nurse, Deborah Bena, at area churches and senior centers.

“I really love it,” said Nuth, looking particularly peaceful after her Sign Chi Do session. “It just makes you feel so good, you feel so relaxed.”

“I feel much less stiff afterwards,” Phillips said, “and generally feel about as good as I can, and it helps me in praying.”

Her favorite Sign Chi Do program is the one produced around the beatitudes.

Deborah Bena said there have been more specific benefits for Sign Chi Do participants. For example, she noted the case of one elderly woman who was fearful and anxious about the prospect of undergoing an MRI diagnostic exam.

“Sign Chi Do really helped her go through the process calmly and with almost no anxiety at all,” Bena said, while she described the experience of another participant who, she said, was able to undergo intimidating, major dental work with little pain or fear.

“And you can really see the benefits even to the extent of lowering high blood pressure and in helping control the symptoms of diabetes,” Bena said.

St. Dominic pastoral associate Sister Catherine Manning SSND, said she is delighted by “the positive and very Christian” effects Sign Chi Do has had on her parish’s participants.

“I really recommend it,” she said.