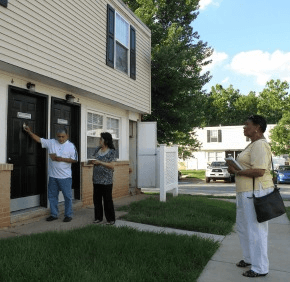 ESSEX – For some parishioners at St. Clare in Essex, the “freedom to bear witness” is not just a warm, fuzzy concept, but a call to action. They heed it, heading out to pound the pavement in surrounding communities.

“Freedom to Bear Witness” is the theme of this year’s June 21-July 4 Fortnight for Freedom, an annual, two-week period of prayer, discussion and advocacy focused on the preservation of religious liberty, coordinated by the U.S. Conference of Catholic Bishops.

Father Jesse Bolger, pastor of St. Clare, said that though it may be an old-fashioned method, going door-to-door is an effective and rewarding way to bear witness.

“It’s not as daunting as you might think,” he said, adding that he first experienced the tried-and-true method as a seminarian assigned to St. Thomas Aquinas in Hampden.

“By meeting people, we were able to bring people to faith,” Father Bolger said. “I saw a real value in going door-to-door.”

It can certainly grab attention.

“I think people are shocked that the Catholic Church is going out walking the streets,” said Marge Foor, a St. Clare parishioner who participated in a June 29 outreach.

“That’s not normally our M.O.,” put in Glenn Zahner, another parishioner.

About 14 parishioners split into two groups – one English-speaking and one Spanish-speaking – and headed out to nearby neighborhoods.

Led by Jose Sarcedo, 54, who emigrated from Peru 14 years ago, the Spanish-speakers drove to the Fontana Village townhome complex in Rosedale to do their canvassing.

Although parishioners typically canvass within parish boundaries, the St. Clare footprint is more expansive for the parish’s Hispanic community, as there are fewer parishes across the Archdiocese of Baltimore that offer Masses celebrated in Spanish.

Sarcedo said many of the immigrants he engages in conversation often inquire about sacraments for their children, such as baptism and first Communion. He added that he believes there has been an uptick in Spanish Mass attendance since the door-to-door campaigns started.

“This is, I feel, working for Jesus,” said Riutort Badilla. “There is a lot of need in the community.”

The trio met a few other missionaries at Fontana Village. Split into two groups, they managed to knock on a total of 114 doors in just under two hours.

Reactions were varied among the 44 residents who answered the knock on their doors.

“No, thank you,” said one man through his mail slot.

Another man, a member of a different Christian denomination, spoke with Sarcedo for a few minutes.

“He said he doesn’t believe in her,” Sarcedo reported, pointing to the cover of the St. Clare brochure, which featured a rendering of Our Lady of Guadalupe.

“That’s OK; I think he’s confused,” he said. “We don’t want to fight with anybody.

Santiago and a young man had a brief conversation punctuated with gentle laughter.

“He said his wife goes to (St. Clare),” she reported. “I asked him why he doesn’t go, and he laughed. Maybe he has to work.”

One person asked Sarcedo about the possibility of baptizing a child at St. Clare. Most who opened their doors took the parish brochures with smiles.

Back at St. Clare, the English-speaking group reported similar successes.

“Just this Sunday I was saying to my husband that I need to go back to church,” was one reported response.

In another, a woman chased the group down to report with joy that her heroin-addicted daughter had been clean since she had attended Mass and received the sacrament of reconciliation at St. Clare.

Father Bolger said that going door to door “fulfills the call to be missionary disciples.”

“It’s a one-on-one engagement face to face with people – not so much what you post on Facebook or Twitter – that’ll truly make disciples of Christ,” he said.

Holding up the martyrs as examples, Father Bolger added that encroachments on religious liberty by the government would never end the church’s mission. He noted that some of his parishioners had been present in El Salvador when Blessed Oscar Romero was assassinated.

“Right here in my parish I have immigrant Catholics who know first-hand the tyranny of governments that can take away the freedom to bear witness in a very violent way, and they don’t take it for granted,” he said.

“So this door-to-door witnessing today is a reminder for us to not take it for granted.”

Commentary: Buildings from past, or landmarks of religious liberty