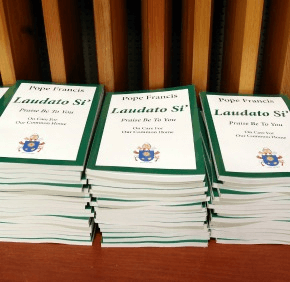 UNITED NATIONS – A Vatican official told a U.N. gathering on climate change that Pope Francis’ new encyclical is calling on all societies to examine how they produce and consume goods and on all the world’s people to realize the role they, too, have in addressing global warming.

Cardinal Peter Turkson, president of the Pontifical Council for Justice and Peace, echoed many of the sentiments raised by the encyclical during a June 29 address.

In the document, “Laudato Si’, on Care for Our Common Home,” the pope argues that “climate change is a global problem with grave implications: environmental, social, economic, political and for the distribution of goods,” the cardinal said.

The encyclical also said climate change represents one of the principal challenges facing humanity in our day and laments the “widespread indifference to such suffering, which is even now taking place throughout our world.”

Cardinal Turkson pointed out that the U.N., through its Intergovernmental Panel on Climate Change, has “availed itself of the best scientific research available,” which should “touch us deeply so that we see and hear how the poor suffer and how the earth is being mistreated.”

The cardinal said that just as the 1992 Earth Summit in Rio de Janeiro — officially called the U.N. Conference on Environment and Development — proclaimed that “human beings are at the center of concerns for sustainable development,” the pope’s encyclical emphasizes that the “plight of the poor and the fragility of the planet are intimately related.”

He also said the new encyclical affirms that “the climate is a common good, belonging to all and meant for all” but warned that if present trends continue “this century may well witness extraordinary climate change and an unprecedented destruction of ecosystems with serious consequences for all of us.”

The cardinal told the U.N. group that “prudence and precaution must prevail” and that modern society needs to recognize the need for changes of lifestyle, production and consumption.

“Pope Francis exhorts us to make courageous choices at all levels — as one global family,” he said, stressing that nations, communities and individuals need to take an active role to “reverse the trend of global warming”

To this end, Cardinal Turkson said world leaders must develop policies to drastically reduce emissions of carbon dioxide and other highly polluting gases.

“The use of highly polluting fossil fuels — especially coal, but also oil and, to a lesser degree, gas — needs to be progressively replaced without delay,” he said, calling for more widespread use of renewable sources of energy.

The cardinal said society needs to examine how it produces and consumes goods but more importantly, he said, people must change their hearts and minds.

“The same mindset which stands in the way of making radical decisions to reverse the trend of global warming also stands in the way of achieving the goal of eliminating poverty,” he said. “A more responsible overall approach is needed to deal with both problems: the reduction of pollution and the development of poorer countries and regions.”

On June 30, Cardinal Turkson spoke at a related climate change event. He was joined by Archbishop Bernardito Auza, Vatican nuncio to the United Nations. Other speakers included Archbishop Demetrios of the Greek Orthodox Archdiocese of America and Father John Chryssavgis, a Greek Orthodox priest who is an adviser to Ecumenical Patriarch Bartholomew of Constantinople on environmental issues.

A few days earlier, he told an international gathering of agricultural leaders in Milan, Italy, that farming is a “noble vocation” and tied it to the new encyclical.

The cardinal delivered those remarks at the beginning of a symposium on faith and farming during the World Expo in Milan June 27-28. The symposium was part of an initiative led by Catholic Rural Life, a U.S. organization, and the International Catholic Rural Association in partnership with the Pontifical Council for Justice and Peace.

In his presentation, Cardinal Turkson highlighted the connections between “Laudato Si'” and agriculture, stressing that agricultural leaders must pay attention to both human and natural ecology.

He outlined a number of challenges facing contemporary agriculture, including industrialized operations that encourage waste, damage the environment and displace small-scale farmers. He also addressed the use of genetically modified organisms, or GMOs, which he said are not bad in their own right, but have “associated evils,” such as the concentration of productive land among a few owners, increased use of pesticides and the loss of opportunities for rural workers.

The cardinal, echoing some of the points made in “Laudato Si,'” stressed the importance of investing in rural infrastructure and developing sustainable agriculture.

“When farmers, traders, buyers and sellers see their wealth as a common good rather than just private property and the food they produce, prepare and distribute as sustenance we share — then the whole enterprise will sustain our human being and our common home,” he said.