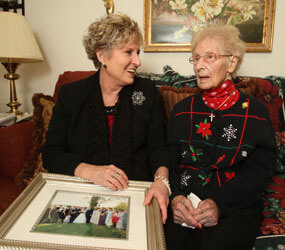 Helen Nale is convinced she’s been to heaven and back.

The 94-year-old parishioner of St. Andrew by the Bay in Annapolis suffered what doctors believe was a stroke in early December. She was rushed to the Baltimore-Washington Medical Center, where medical professionals told her family she was dying. A nurse even warned loved ones it would be better for Nale to spend her final moments with them rather than going through an MRI. The nurse feared the failing woman would die on the MRI table.

Helen Valley, Nale’s daughter, remembered that her mom’s labored breathing had already begun a “death rattle.” Family members urged her to hold on until 6 p.m. when one of Nale’s sons could make it into town from Atlanta for a final goodbye.

Father Martin Burnham, St. Andrew’s pastor, administered the Anointing of the Sick and offered final prayers with the family on the hospice floor where the woman had been moved from the emergency room.

Then, something totally unexpected happened.

At 6 p.m. sharp, Nale opened her eyes and suddenly became animated. She prayed the Our Father and Hail Mary in perfect form. She asked for something to eat. A doctor was called back into the room and couldn’t believe the woman’s complete turnaround. Family members recall that he described the scene as a “miracle.” The woman was discharged the next morning.

Nale doesn’t remember any of her time in the hospital. She believes she was in the next life and was sent back to this world to complete unfinished business.

“I saw angels,” Nale remembered, sitting in her room at Valley’s Severna Park home a few days before Christmas.

“They were flying around and they had curly hair,” she said. “I saw all these fancy buildings with real beautiful artwork like it would be in Italy or someplace.”

Nale said she was reunited with deceased family members including her husband, her sister, her mother and her father. She also saw a glimpse of her five-year-old son who died of leukemia many decades ago. They said nothing, but beckoned for her to come closer.

“I had a very happy feeling,” said Nale, who also remembered seeing a woman sitting at a well giving another woman a cup of water. “Everything was happening all at once. It was a beautiful thing to be with God and the angels. I feel like I got a taste of heaven.”

Nale, who suffers Parkinson’s disease, remembers telling her dead family members she would be back. She waved and her hands got heavy. Then she woke up in her hospital bed.

“I came back because I think I wanted my family to be happy the rest of their lives,” Nale said.

The devoted Catholic, a descendant of Czech immigrants and a former longtime parishioner of the Shrine of the Little Flower in Baltimore, said her mission is to bring back to the faith those family members who don’t go to church.

Nale’s experience has had a profound influence on the entire family, Valley said.

“It was just incredible for all of us,” she said. “She’s been different ever since that day. For a few days after coming home, that’s all she could talk about. She seems to have a new lease on life.”

Valley noted that her mother’s constant back pain and runny nose have disappeared.

Father Burnham shared Nale’s story in his Christmas homily at St. Andrew. He told the woman that although he’s visited many people who have had healings, she was the first to “come back from the dead.”

“It’s just a confirmation of faith that they believe in life after death,” Father Burnham said, “and they’ve just been lucky enough to taste it and to taste that real peace.”

Jennifer Williams contributed to this story.